We should note that in three months before the earnings release, Consol Energy stock had already increased a whopping ~184%. This was mainly due to the increase in natural gas prices during the same period. 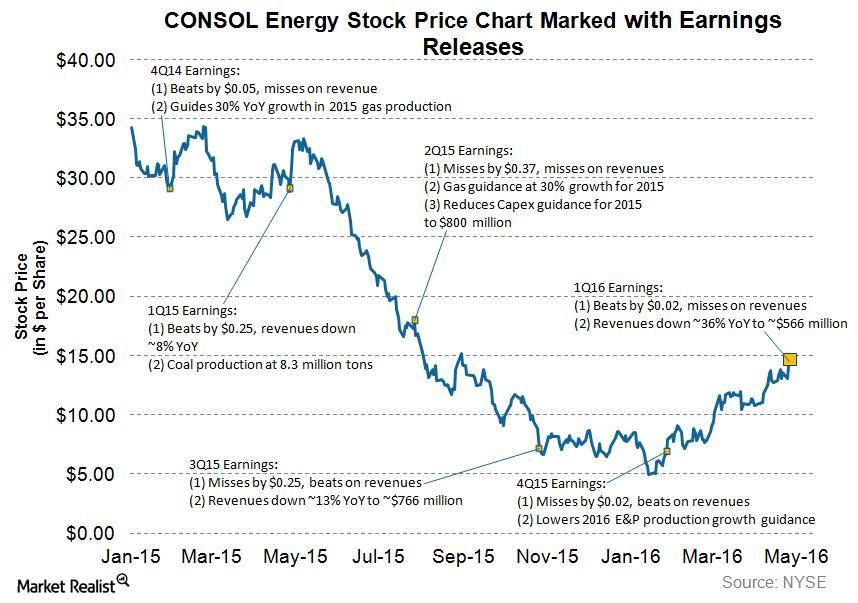 Falling crude oil (UCO) and natural gas (UGAZ) prices over the last two years have led to a falling trend in the entire upstream sector. But since January 2016, as you can see in the above graph, Consol Energy stock is in a new uptrend. It’s clearly making a pattern of higher highs and higher lows.

For 2016, Consol Energy is outperforming other upstream companies. It has risen ~79%, whereas other oil and gas producers such as Carrizo Oil & Gas (CRZO), EP Energy (EPE), and Gulfport Energy (GPOR) have risen ~21%, ~8%, and ~24%, respectively. Carrizo Oil & Gas and EP Energy produces more liquids in their production mixes, whereas Gulfport Energy is primarily a natural gas producer.

In the last six quarters, CNX has beat earnings expectations twice, in 4Q14 and 1Q15. The post-earnings reactions in those two quarters were decidedly positive, mainly due to better-than-expected earnings results.