Previously in the series, we discussed analysts’ expectations from Microsoft’s (MSFT) fiscal 3Q16 results. The US dollar (UUP) is one factor that impacts Microsoft and the entire technology space. Like its peers Oracle (ORCL) and IBM (IBM), Microsoft also generates more than half of its revenues from outside the United States. As you can see from the chart below, US contribution towards overall revenues is on the decline while revenues from other countries are continuing to increase. 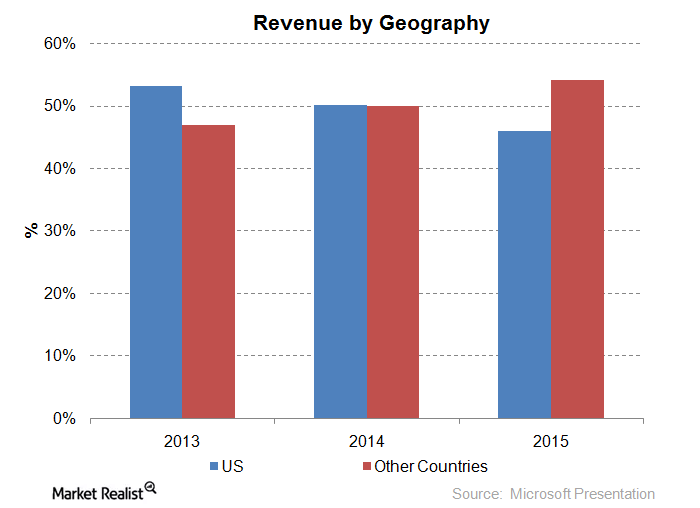 The technology sector is highly sensitive to currency

The strengthening of the US dollar against major currencies negatively affects the above players due to their dependence on foreign countries for the majority of their revenues. In fact, the strong US dollar is bad news for the entire technology sector, as the majority of technology companies derive most of their revenues from outside the United States.

Apart from revenue generation, it is their cash parked overseas that makes companies vulnerable to currency fluctuations. According to a Credit Suisse report released in March 2016, S&P 500 (VOO) companies have at least $750 billion in cash and $2.3 trillion in earnings parked outside the US. Out of the $750 billion in cash parked overseas, IT (Information Technology) firms account for 53% of the total.
2015 was one of the best years for the dollar. The dollar started 2016 on a bullish note. However, this trend was short-lived, and the dollar started to tumble. The falling dollar is good news for Microsoft and the entire technology sector.

Later in the series, we’ll explore how cash parked overseas poses a risk to valuation as well as the factors that led the US dollar to slide in 2016.