In the previous part of the series, we saw that Micron Technology (MU) posted negative EPS (earnings per share) in fiscal 2Q16.

On a non-GAAP (generally accepted accounting principles) basis, the company’s gross margin fell from 34% in fiscal 2Q15 to 20% in fiscal 2Q16. This was because DRAM’s (dynamic random access memory) average selling price fell 10% while the cost per bit rose 1% during fiscal 2Q16. 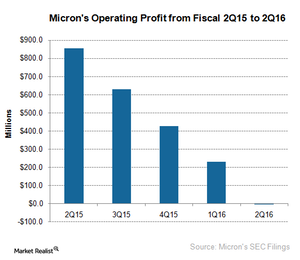 DRAM’s ASP fell due to a fall in PC (personal computer) shipments and an oversupply in the DRAM market. According to IDC (International Data Corporation), global PC shipments fell 10.6% YoY (year-over-year) in 4Q15 to their lowest level since 2007.

The last time the memory market reported oversupply was in 2011 and 2012. Micron’s gross margin fell to 13% in fiscal 2Q12. The situation is better this time around, and it’s likely to improve in fiscal 3Q16.

On the other hand, costs have risen as the company has been transitioning its DRAM production to 20 nm (nanometer) technology.

The high manufacturing costs incurred in the early stages of 20nm development have been divided between fiscal 1Q16 and 2Q16. The company expects to start realizing the cost benefits associated with 20nm technology from fiscal 3Q16 onward.

However, Micron will not be able to gain the maximum benefit from this transition, as Samsung (SSNLF) is already producing most of its DRAM on 20nm. The case with 3D NAND (negative AND) is the same.

While Micron is ramping up production of 3D NAND at its Singapore (EWS) plant, Samsung has been manufacturing it for two years, thus gaining a first-mover advantage. Like Micron, the Toshiba (TOSBF) and SanDisk (SNDK) joint venture is also ramping up its 3D NAND production at a plant in Japan.

In January 2016, Micron announced the resignation of its president Mark Adams for personal health reasons. On the fiscal 2Q16 earnings call, Micron’s CEO Mark Durcan stated that the company would revamp its organizational structure instead of finding a replacement for Adams.

In the coming parts of the series, we’ll look at the performance of each product and business segment of Micron and identify future growth drivers.