Intel’s (INTC) CCG (Client Computing Group) business saw revenue growth of 2% on a YoY (year-over-year) basis, reaching $7.5 billion despite its 15% decline in volume due to a 19% increase in ASP (average selling price). The desktop ASP rose by 6% YoY, whereas the notebook ASP remained flat. This probably suggests that the strong demand for gaming and other high-end processor segments witnessed in fiscal 4Q15 continued in fiscal 1Q16 as well.

Still, this 2% growth was below the analyst expectation of 8.2% growth, with global PC sales falling even more than expected. 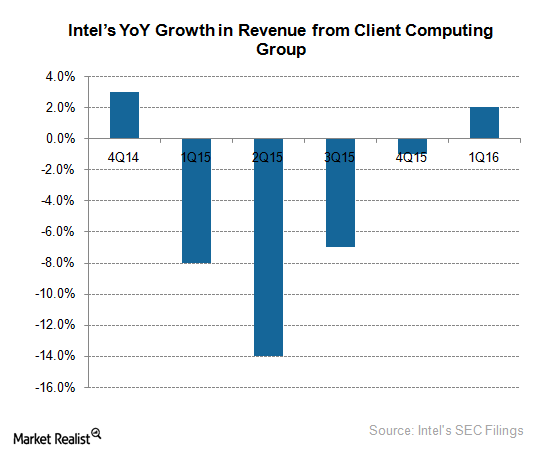 There have been rumors that Intel has secured an order from Apple (AAPL) to supply LTE modems for the iPhone 7, which will be launched in September 2016. Even if this is true, it would only bring 1.5%–2% growth in Intel’s mobile earnings, according to CLSA Securities analyst Srini Pajjuri. This rumor has played negatively for Qualcomm (QCOM), which supplies LTE modems for all Apple products.

Intel expects PC sales to see a high-single-digit drop in 2016. Amid the slowing PC and mobile market, Intel has adopted a segmentation strategy in which it will increase its exposure in high growth areas of gaming, enterprise computers, and tablets.

In the next part, we’ll look at the performance of Intel’s Data Center Group in fiscal 1Q16.