Given that WTI crude oil prices are back in the territory of $40 per barrel, investors would like to know how top upstream stocks will be affected in the event that crude oil’s bad days are over, or vice versa.

This series will take a look at how different upstream companies are correlated with oil and gas prices. Let’s begin by looking at the SPDR S&P 500 ETF’s (SPY) top upstream stocks and their correlations with WTI prices. 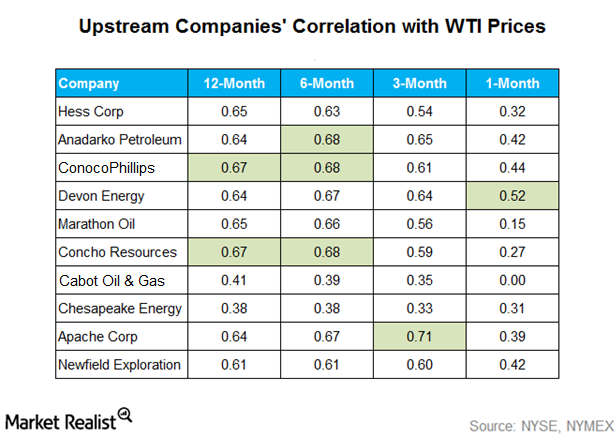 As we can see in the image above, ConocoPhillips (COP) and Concho Resources (CXO) each had a correlation of 0.67 with WTI over the last year. This indicates that these stocks are highly sensitive to changes in crude oil prices in the long term. Short-term correlations with WTI are relatively low for both of these companies.

Again, COP and CXO, along with Anadarko Petroleum (APC), had correlations of 0.68 each in the past six months. Apache (APA) and Devon Energy (DVN) had the highest three-month and one-month correlation coefficients of 0.71 and 0.52, respectively.

Meanwhile, the correlation coefficient between the SPDR S&P Oil & Gas Exploration & Production ETF (XOP)—an index of 57 US exploration and production companies—and WTI prices in the past year was 0.71. XOP’s correlations with WTI in the past six-, three-, and one-month periods were 0.73, 0.71, and 0.53, respectively. This was higher than all of the upstream companies in our select group.

Hess (HES) had relatively lower correlations with WTI compared to its peers. While one-month WTI prices have risen, Hess’s one-month correlation with WTI is 0.32. This shows that short-term upward crude price movements have a small, albeit positive, effect on Hess’s stock.

Meanwhile, in the 12-month and six-month periods, when crude oil prices were falling, Hess’s correlations were higher at 0.65 and 0.63, respectively. This indicates that Hess’s stock price was more sensitive to the fall in crude oil prices in the last year.