On February 21, 2016, Gizmodo reported that the Walt Disney Company (DIS) would be adding Star Wars–themed attractions to its theme parks in California and Florida. Disney’s Parks & Resorts saw revenues of $4.4 billion in fiscal 4Q15, which was up by 10% YoY (year-over-year), driven by higher per capita guest spending at its theme parks. 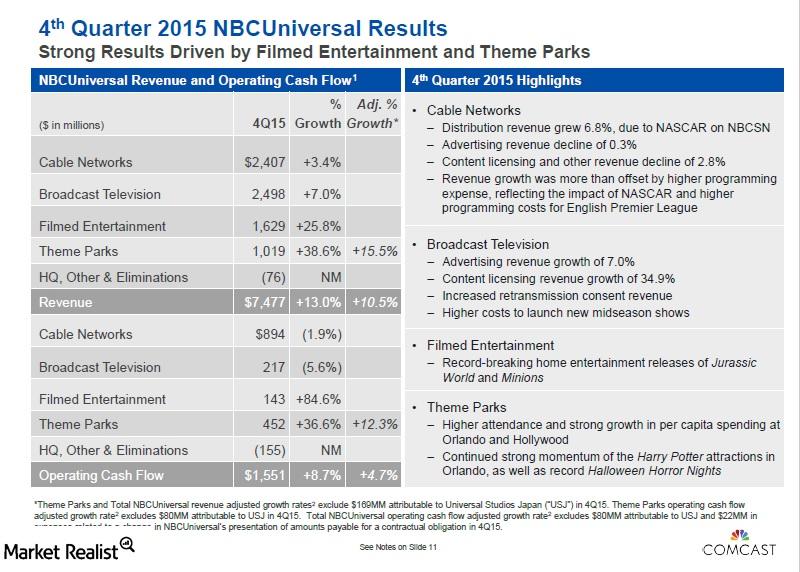 In contrast, Comcast’s (CMCSA) Theme Parks segment saw revenues of $3.3 billion in fiscal 2015, driven by higher attendance and per capita guest spending at the company’s Universal theme parks. In 2016, Comcast will open a Harry Potter theme park in Hollywood, and it plans to integrate Universal Studios Japan into its Theme Parks portfolio.

Comcast expects its capex to rise by about 10% in fiscal 2016 for Comcast’s NBCUniversal businesses. The reason for the increase in capex is because Comcast plans to continue to invest in the company’s theme parks and consolidation of Universal Studios, Japan. During 3Q15, Comcast acquired a 51% stake in Universal Studios Japan (EWJ).

Notably, Comcast makes up 2.9% of the PowerShares QQQ ETF (QQQ). For investors interested in getting exposure to the television and radio sector, QQQ has 4.9% in TV and radio. QQQ also holds 8.7% of Microsoft (MSFT) and 5.6% of Amazon (AMZN).