The lean business models and low-cost structures of off-price retailers TJX Companies (TJX) and Ross Stores (ROST) have helped them sustain higher operating margins than other department stores. Also, off-price retailers turn over their inventory faster, which also helps them enhance their margins. 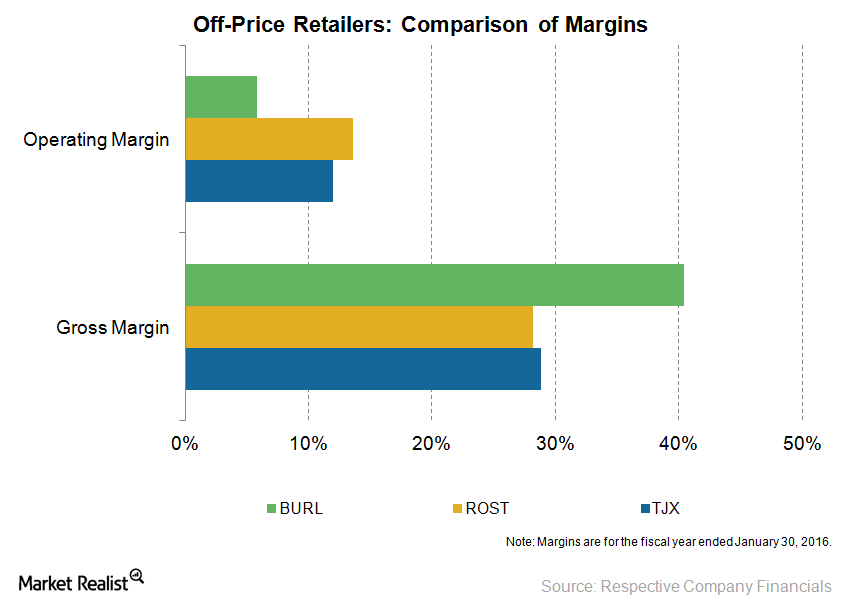 In the fiscal year ended January 30, 2016, TJX Companies reported a gross margin of 28.8%, which marked a 20-basis-point improvement from the previous fiscal year. This increase was a result of higher merchandise margins. The fiscal 2015 gross margin of Ross Stores, for example, improved by ten basis points to 28.2%, due to higher merchandise margins.

TJX Companies expects its gross profit margin to come in the 28.3%–28.5% range in fiscal 2016 as compared to 28.8% in fiscal 2015. This lower estimate reflects the potential impact of currency headwinds. The operating margins of off-price retailers in the current fiscal year are likely to be impacted by higher wages. Ross Stores will raise the minimum wage for eligible hourly associates to $10 per hour in the second quarter of 2016, up from the current $9 minimum. TJX Companies and Ross Stores together account for 2.2% of the SPDR S&P Retail ETF (XRT).

We’ll discuss the inventory management of off-price retailers in the next part.