A research report stated that more than 100 million smartphones with 4G (fourth-generation) LTE technology were shipped to China in 3Q15, indicating a YoY (year-over-year) increase of 200%. The total number of Chinese subscribers with 4G LTE stands at approximately 340 million.

Nokia also expects the third wave of 4G LTE deployments in markets such as Latin America, Africa, and the Middle East. China Mobile (CHL), the largest telecom provider in China, has been instrumental in growing 4G penetration. 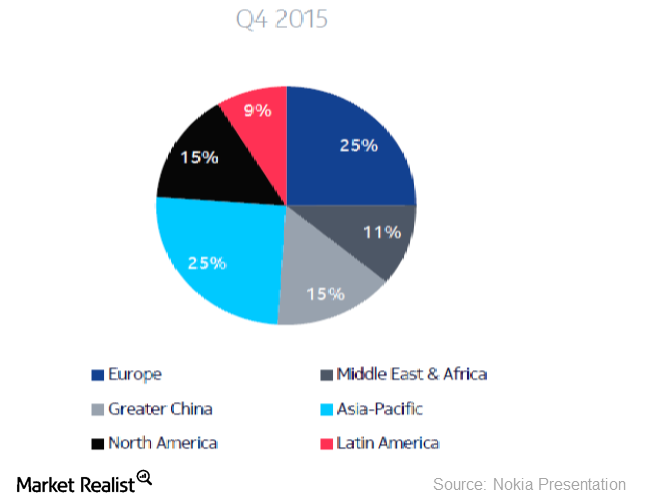 5G rollouts will act as catalysts in the future

In the last quarter, Nokia’s revenues from Asia-Pacific fell 12% YoY driven by the ongoing decline in Japan (EWJ). Rajeev Suri, CEO (chief executive officer) of Nokia, said, “While there were pockets of growth, notably in India, which had a stellar year, and in the Philippines and Thailand, these areas were not sufficient to offset the impact of Japan. As you are aware, Japan has been particularly challenging for us and others in the industry over the course of 2015. With the expanded portfolio that we now have, we continue to see opportunity in Japan, but the next large catalyst for the market to improve is likely to be when 5G rollouts start to accelerate.”

Nokia accounts for 2.2% of the First Trust NASDAQ CEA Smartphone ETF (FONE). The top holdings of FONE include Apple (AAPL) and Blackberry (BBRY), which constitute 3% and 2.8%, respectively, of the ETF.