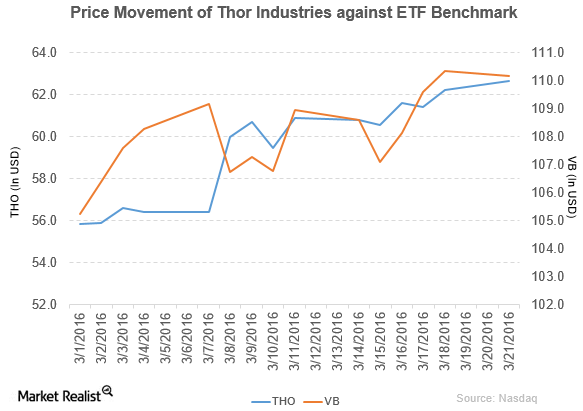 The Vanguard Small-Cap ETF (VB) invests 0.10% of its holdings in Thor Industries. The ETF tracks the CRSP US Small Cap Index. The market-cap-weighted index includes the bottom 2%–15% of the investable universe. The YTD price movement of VB was 0.03% as of March 18, 2016.

The Vanguard Small-Cap Value ETF (VBR) invests 0.17% of its holdings in Thor Industries. The ETF aims to track the CRSP US Small-Cap Value Index. The index selects from a list of stocks in the 85%–99% range of market cap, based on five value factors.

The market caps of Thor Industries’ competitors are as follows:

Thor Industries has increased its production capacity at its Thor Motor Coach subsidiary with the purchase of a 128,0000-square-foot production facility in Bristol, Indiana. The facility will meet the demand for the Thor Motor Coach’s Class C brands from dealers and consumers.

Next, we’ll look at Sealed Air’s quarterly dividend per share.