Previously in the series, we discussed leading players’ capital spending in the cloud space in 2015, which is expected to increase in 2016. Amazon’s (AMZN) and Microsoft’s (MSFT) positions and growth in the cloud space is due to their large presence in data centers. Data center infrastructure, computing capacity, and geographic scale are considered crucial prerequisites for a sound cloud service.

John Dinsdale, an analyst at Synergy Research Group, is of the opinion that Google’s (GOOG) (GOOGL) soft position in the cloud space can be partially attributed to the company’s inadequate network of data centers. Google took the hint, and under the guidance of Diane Greene, senior vice president for Google’s cloud business, recently announced that by the end of 2017, the company intends to build 12 new data centers to expand the global reach of its Cloud Platform services. 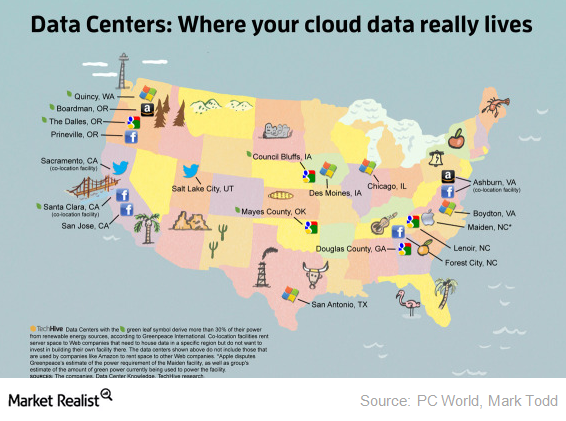 Currently, Google is present in four regions. Post expansion, Google’s Cloud Platform will be available in 15 regions across the world including Japan (EWJ). For comparison purposes, Amazon’s AWS (Amazon Web Services) operates in 12 regions and plans to have five more in the near future. The image above shows the locations of the data centers operated by Amazon, Apple (AAPL), Facebook (FB), Google, Microsoft, and Twitter (TWTR).

In February 2016, Google managed to earn a customer in Spotify, a music streaming company that has been using Amazon’s AWS for a long time. Dave Bartoletti, an analyst with Forrester Research, called the Spotify deal “a great win for Google.” Bartoletti is of the opinion that Google’s data analytics service, BigQuery, helped the company to win the Spotify deal.

In March 2016, Google reported that it also won some business from Apple (AAPL), who has long preferred AWS.