The major Asian markets (AAXJ) were trading on a positive bias on March 21, 2016, after the sharp rise in Chinese indexes. The Shanghai Shenzhen CSI 300 and the DJ Shanghai Index rose by 2.2% and 2.5%, respectively, at 6:30 AM EDT. The Japanese (DXJ) markets were closed for a holiday.

The positive trend was also evident in the Indian (INDA) markets as the Nifty 50 rose by 1.3%. The rise in the Indian markets was attributed to the expectations of a rate cut by the Reserve Bank of India after the Indian government reduced the deposit rates on retail savings last week. 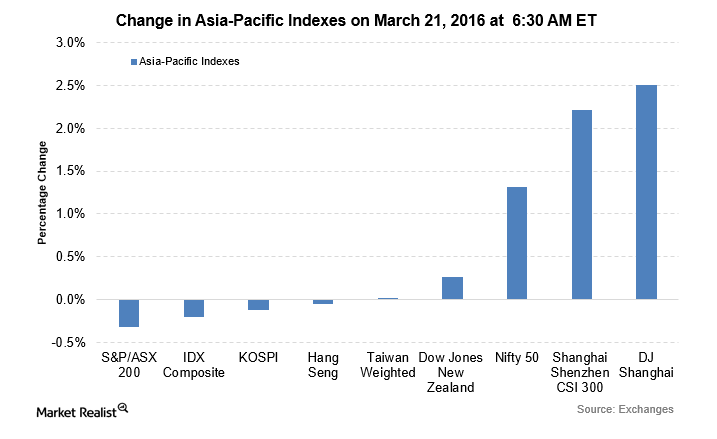 Why did Chinese indexes get a boost on Monday?

Chinese indexes (FXI) rose for the seventh straight trading day on March 21, 2016. The rise on Monday was primarily attributed to the Chinese Securities Finance Corporation (or CSF). CSF is the major lender of money to brokerages for margin financing, and it decreased its six-month loan rate from 4.8% to 3%.

Margin financing refers to borrowing money from the brokers to purchase a stock using a margin account. CSF also opened the lending business for four other terms—seven, 14, 28, and 91 days—which had been suspended for over a year. This gave a huge boost of confidence to investors as the major Chinese indexes were leading the rise in Asian indexes.

The Westpac New Zealand consumer sentiment for 1Q16 came in at 109.6, which was slightly below the forecast. The fall was significantly attributed to the fall in dairy exports, which was partially counterbalanced by the tourism sector. The number of visitors and the amount of visitor spending rose.

In a separate report by Statistics New Zealand, the year-over-year visitor arrivals in February rose by 8.7%.