Schlumberger’s (SLB) revenues were in a downtrend from 1Q15 until 4Q15. Geographically, revenues from Schlumberger’s North America region declined the most, by 55%, in the past one year until 4Q15. Its Middle East and Asia region revenue fall was relatively moderate, by 27%, during the same period.

All of Schlumberger’s three product group segments witnessed revenue declines in 4Q15 over 4Q14. Its Production segment witnessed the highest revenue decline, by 45%, followed by Drilling, which saw a 35.5% fall, and Reservoir Characterization, which dropped by 34%. 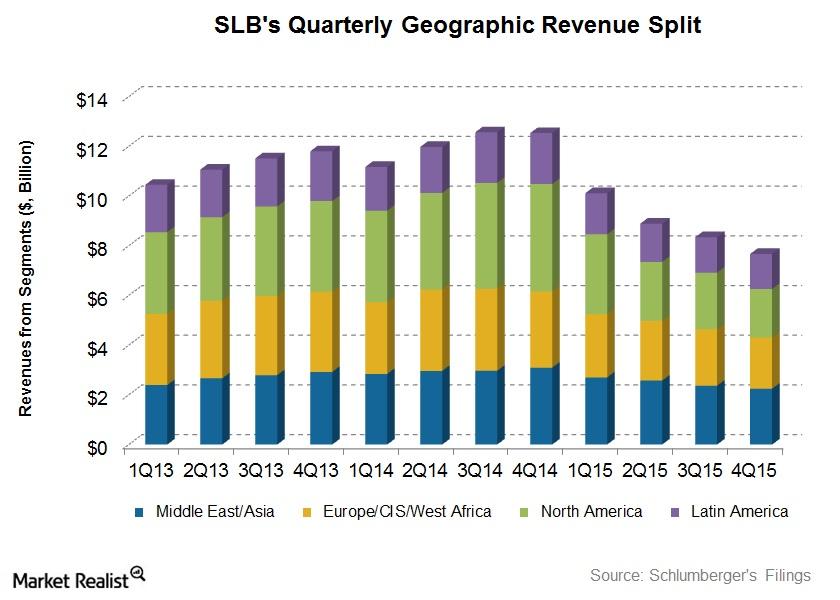 In 2015, Schlumberger recorded total revenues of $35.47 billion, down 27% from $48.58 billion recorded in 2014. Schlumberger makes up 7.3% of the iShares US Energy ETF (IYE), but for investors looking for exposure to the industry, IYE has 15.2% exposure to oil and gas equipment and services.

With regard to operating income, Schlumberger’s North America operation tumbled by 84% to $139 million in 4Q15 compared one year previously. The company’s Latin America region was more resilient, with 24% operating income fall during the same period.

In 2015, Schlumberger’s reported that its net income had deteriorated to ~$2.1 billion, compared to about $5.4 billion in 2014. In comparison, Halliburton (HAL), Schlumberger’s smaller market cap peer, recorded a $671 million net loss in 2015.

These negative factors were partially offset by SLB’s strong performance in Saudi Arabia, Kuwait, and Oman.