The Chilean peso gained against the US dollar on February 12, 2016, on the back of an unchanged monetary policy stance by the Banco Central de Chile and a surge in commodity prices. But Central Bank President Rodrigo Vergara kept the interest rate at 3.5% and said that inflation levels were being constantly monitored as prices still remain above the target range of 4%.

A tightening bias was maintained over further policy outlook in order to bring the inflation down to a comfortable range. Consumer price inflation for Chile in the month of January rose by 4.8% on an annual basis, while core inflation increased by 4.9%. 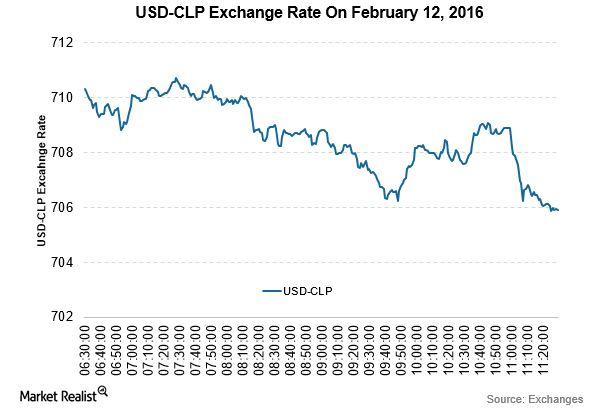 Sluggish growth in the Chilean economy has put pressure on its central bank’s rate decision, as growth metrics indicate a slowdown. (For more on the higher price level and interest rate expectations by the central bank, check out “Chilean Peso Fell: What Does Inflation Have to Do with It?” and “Pressure on Chilean Peso: What’s Making Speculations Escalate?“)

On February 12, the Chilean peso was also trading positively among other commodity currencies like the Colombian peso and the Russian ruble, as there was a spike in the value of global commodities.

But Chile is also the largest producer of copper, and the recent low pricing of the metal has led to weaker foreign investments in the Chilean economy last year, thus weighing further on the Chilean peso. Copper prices were trading higher, by more than 1%, on February 12 while crude prices saw a rebound by more than 12% at the end of the day.

Notably, sentiment for energy-based stocks increased as the UAE energy minister stated that OPEC (Organization of the Petroleum Exporting Countries) members were looking to reduce the production supply of oil in order to increase global crude prices.

As for ETFs, the iShares MSCI Chile Capped ETF (ECH) rose by 2.4% on February 12, 2016, as the Chilean peso traded stronger. The ProShares Ultra Bloomberg Crude Oil ETF (UCO) was trading 6.5% higher as well.

Chile-based ADRs (American depositary receipts) were also performing on a positive note that day. Enersis (ENI) was trading on a higher note, showing a rise of 2.7% by the end of the day, and LATAM Airlines Group SA (LFL) and Empresa Nacional de Electricidad SA (EOC) were trading 1.6% and 2.9% higher, respectively.