According to the news release by Regeneron Pharmaceuticals (REGN), it will announce its earnings for 4Q15 and fiscal 2015 on February 9, 2016.
According to Wall Street analysts’ estimates, Regeneron’s sales would be $1.18 billion and $1.23 billion for 4Q15 and 1Q16. 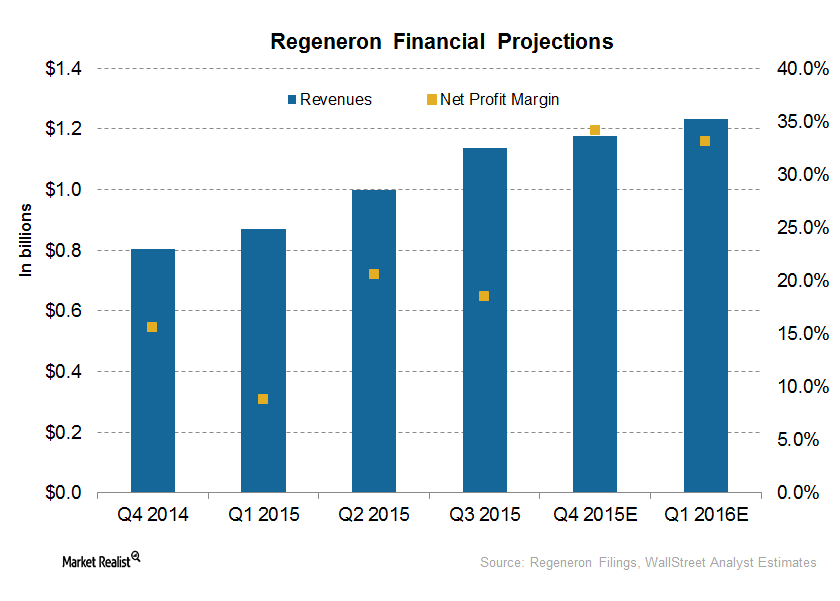 The above graph shows the revenue and net profit estimates for Regeneron Pharmaceuticals for 4Q15 and 1Q16. For 2015, Wall Street analysts expected the company’s revenue to be ~$4.2 billion. This would reflect year-over-year growth of ~48% in 2015.

Regeneron’s net margin during 3Q15 was ~18.5%. Historically, the net margin has been very volatile. It fluctuated from 8% to 24% for the last ten quarters. Higher research and development expenses led to squeezed margins compared to its peers. For global Eylea sales, Regeneron shares its profits with Bayer HealthCare—a collaboration partner for the drug’s development and commercialization outside the US.

To avoid volatility and direct risk associated with the stock, investors can look for options like the First Trust NYSE Arca Biotechnology Index Fund (FBT). FBT has 3.50% weight in Regeneron Pharmaceuticals.