According to Facebook (FB), an average adult spends 25% of their media time on mobile devices. The company also claims that Facebook and Instagram together account for 20% of users’ mobile device time in the US. This caused Facebook’s revenue from mobile ads to rise at a fast rate. In 3Q15, Facebook’s mobile ad revenue grew by 73% on a YoY (year-over-year) basis. Mobile accounts for 78% of Facebook’s overall ad revenue. 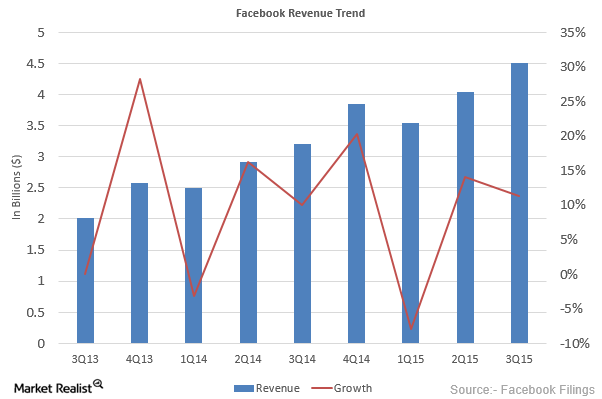 In the above chart, you can see Facebook’s revenue distribution over the last few quarters and its growth over the period. The company has been following a trend of ups and downs for every alternate quarter. If the same trend continues for 4Q15, it’s likely that Facebook will meet analysts’ expectations of 24.7% growth in revenue compared to the previous quarter.

Facebook’s worldwide ARPU (average revenue per user) grew by $0.21. Most of the revenue is driven from the US and Canada at $2.1 billion. It’s followed by Europe (EFA) and Asia-Pacific at $1.0 billion and $694.0 million, respectively. The ARPU growth in the US and Canada remained strong in 3Q15. Asia-Pacific showed signs of declining growth due to currency headwinds.

However, Asia-Pacific showed significant growth in MAUs (monthly active users) of 22.5%. It surpassed the MAU growth from Europe and the US. They grew by 6.4% and 5.3%, respectively. Asia-Pacific’s growth likely rose due Facebook’s Internet.org initiative. It aims to allow free internet access to limited website or apps. The program brought 15 million people online. It’s expected to grow even more in the future.