The respiratory, inflammation, and autoimmunity (or RI&A) segment is one of the key focus areas of development for AstraZeneca (AZN). This segment contributed nearly 19.2% of total revenues for 2014, and 4Q15 estimates predict that the segment’s contribution will be over 22% of the company’s total revenues. 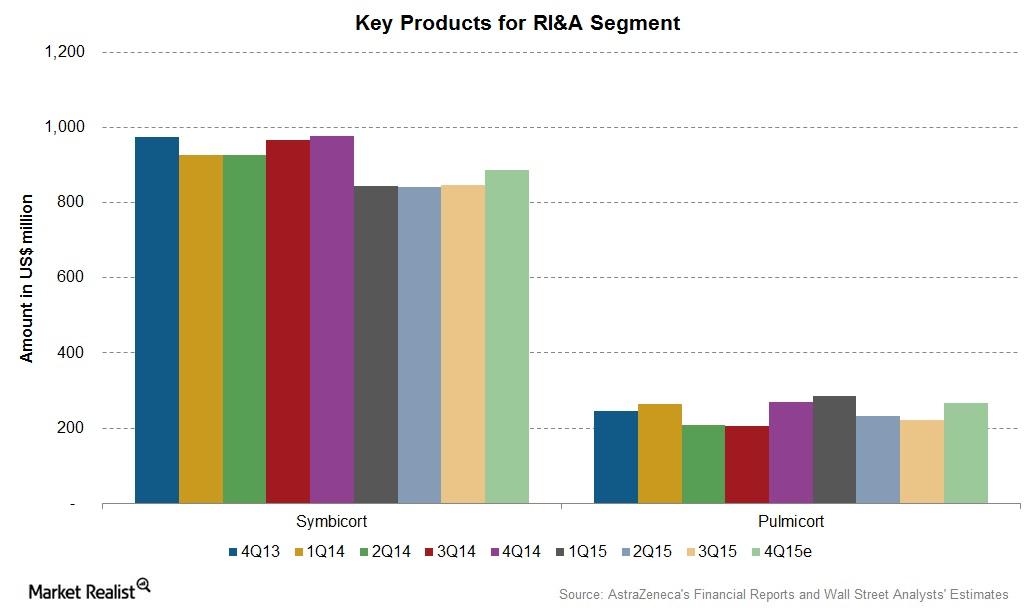 To strengthen the portfolio, AstraZeneca had acquired Almirall’s respiratory business and inhalation device subsidiary in November 2014 and Actavis’s branded respiratory portfolio for the US and Canada in 2015. The key products for the RI&A segment are Symbicort and Pulmicort. Newly added products include Tudorza, Eklira, and Duaklir.

Symbicort, another blockbuster from AstraZeneca, is a respiratory drug used to prevent bronchospasm in patients suffering from severe asthma or chronic obstructive pulmonary disease. Symbicort’s 4Q15 revenues are estimated to decline by ~9% to $887 million due to lower demand and impact of foreign exchange.

Symbicort’s competitors are Advair from GlaxoSmithKline (GSK), Spiriva from Boehringer Ingelheim, Foradil from Merck and Co. (MRK), and Brovana from Sunovion Pharmaceuticals.

Pulmicort is a respiratory drug used to prevent asthma attacks. Pulmicort’s 4Q15 revenues are estimated to remain constant at ~$266 million as compared to 4Q14 revenues. Both Symbicort and Pulmicort have a growing demand across emerging markets including China.

Other drugs like Eklira and Duaklir were added to AstraZeneca’s portfolio as a result of the AstraZeneca-Almirall deal while Tudorza was acquired from Allergan (AGN), which was formerly Actavis (ACT).