Revenue in the previous quarter

Altria Group (MO) is set to release its 4Q15 and 2015 earnings when the market opens on January 28, 2016. MO’s earnings were in-line with consensus Wall Street analysts’ expectations, and its revenue was ahead of expectations in 3Q15. 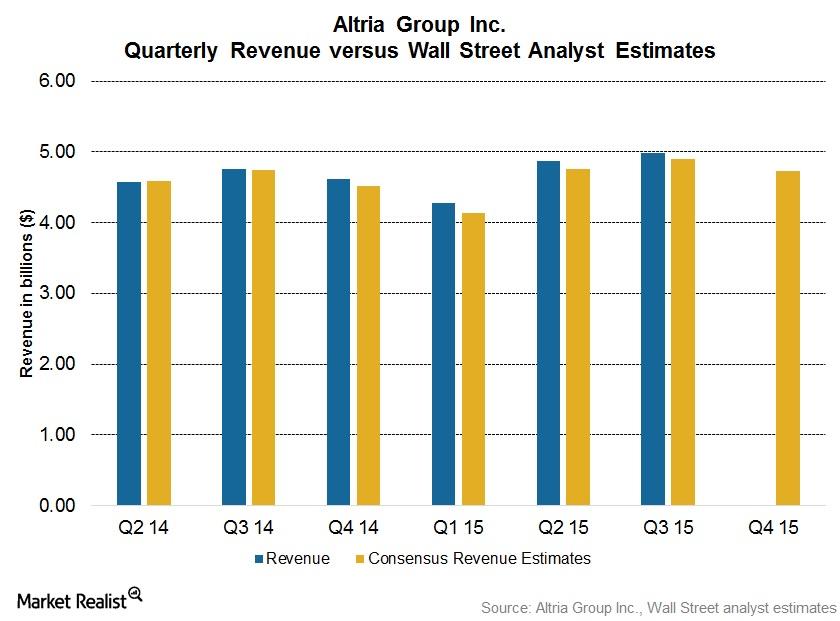 Altria’s net revenue rose 4.7% to ~$5 billion in 3Q15 compared to $4.8 billion in 3Q14. The increase was due to a rise in revenue for all segments, including smokeable products, smokeless tobacco, and wine. Altria’s tobacco companies’ revenues rose primarily due to higher pricing and higher volumes, partially offset by higher promotional investments.

For 4Q15, Wall Street analysts’ consensus revenue estimate is $4.7 billion, a 4.7% rise in revenue from the same quarter last year.

Peer Philip Morris International’s (PM) reported revenue, excluding excise taxes, fell 11.8% to $6.9 billion in 3Q15. Despite the fall, PM came in ahead of consensus Wall Street analysts’ estimates on sales in 3Q15 for the sixth-consecutive time in a row.

Will the AB InBev and SABMiller transaction help to strengthen the top line?

Altria constitutes 1.3% of the portfolio holdings in the iShares Select Dividend ETF (DVY).[1. Updated as of January 17, 2016]