Previously, we saw that China’s (MCHI) construction activity slowed down in 2015 although building sales picked up. Although steel is used in the initial structure of a building, copper finds its way into construction projects when the building is nearing completion. Copper is used in plumbing and electrical fittings, which are installed after the initial structure is built. 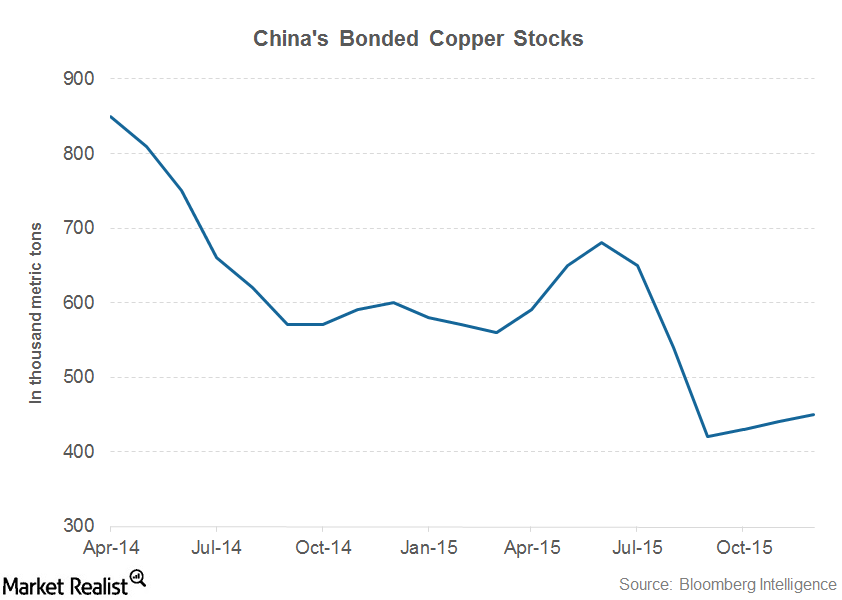 The construction industry’s slowdown was visible in Chinese steel demand last year. However, the spillover could be seen in 2016 and beyond on copper demand as well. As fewer buildings come up for completion this year, China’s copper demand could be negatively impacted.

The falling financing demand could also dent China’s copper demand in 2016. China’s bonded copper stocks have been falling, as can be seen in the graph above. The narrowing differential between Chinese and US interest rates, coupled with China’s currency devaluation, could weigh heavily on copper’s financial demand this year.

Moreover, we might also see a spillover of China’s stock market correction on the country’s economy. Measures taken by the Chinese government such as the extension of the ban on short selling would provide only momentary relief. Ultimately, for equity prices to find their fair value, they have to be left to market forces—something China has been avoiding.

The negative sentiment could impact the consumer demand in China in 2016 that could lead to lower copper demand this year.

In the next part, we’ll explore how copper’s supply could shape up in 2016. We’ll analyze whether supply cuts by Freeport-McMoRan (FCX) and Glencore (GLNCY) could be enough to restore the supply balance or more production by Southern Copper (SCCO) and BHP Billiton (BHP) could push the copper markets into a surplus in 2016.