In Part 2 of this series, we saw that China’s December manufacturing PMI (purchasing managers’ index) missed analyst expectations. Copper producers Freeport-McMoRan (FCX), Teck Resources (TCK), Southern Copper (SCCO), and Turquoise Hill Resources (TRQ) fell as China’s slowdown pushed copper prices to multiyear lows in 2015. In this part of the series, we’ll explore how the Chinese economy could play out in 2016. 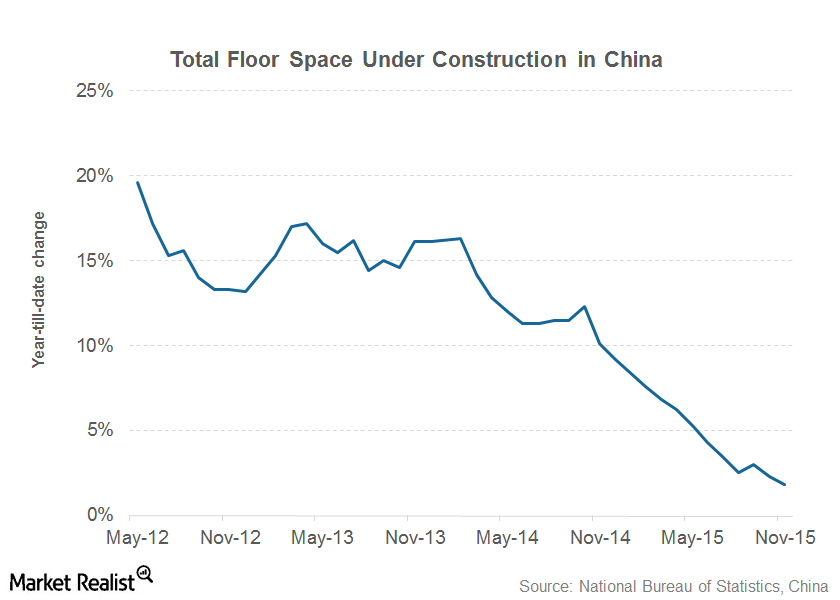 In 2015, the Chinese economy was expected to have grown at the slowest pace in almost 25 years. The economic growth outlook for 2016 looks no better and economic activity is set to cool off further. Although some of the Chinese economic indicators did improve in the second half of 2015, they were largely ignored by the markets.

China’s (FXI) real estate indicators started to improve in the middle of 2015. China’s building sales rose on a year-over-year basis in each month between April–November 2015. However, in the first 11 months of fiscal 2015, Chinese real estate development enterprises purchased 33.1% less land for future construction as compared to the corresponding period in the previous year. Also, the floor area under construction has been falling steadily, as shown in the graph above.

In the next part, we’ll explore why China’s copper demand could deteriorate further in 2016.