Growing online activities raise challenges for technology companies to engage more and more users by providing “one-stop solutions” for all activities, from messaging to social media to e-commerce to online payments.

In 2011, Tencent Holdings debuted its online messenger service with its smartphone app WeChat, which allowed users to send free messages. Over the period, WeChat engaged online users from different activities by incorporating additional features that allowed them to send money, purchase online, and book doctors’ appointments. 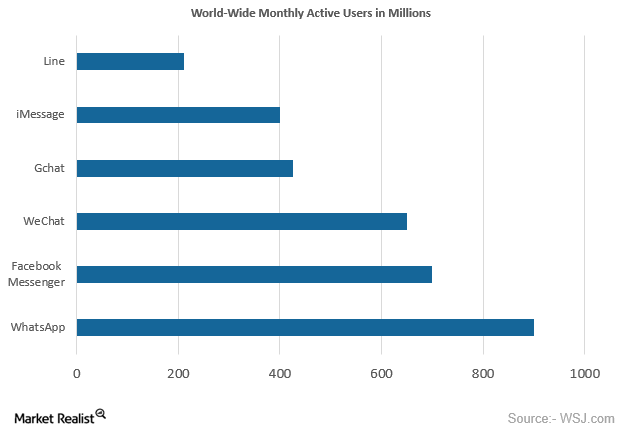 Online users devote most of their online time to messaging apps, which become the center of all other services due to their simplicity. As the chart above shows, Facebook’s (FB) WhatsApp has the highest number of monthly active users at 900 million, followed by Facebook Messenger and WeChat with 700 million and 650 million monthly active users, respectively. Despite its high number of online users, Facebook keeps an eye on WeChat features to improve its messaging app.

According to the Wall Street Journal, around 2.5 billion users are connected to at least one messaging app. This number is expected to reach 3.6 billion in 2018, which constitutes 90% of worldwide internet use.

In 2013, WeChat incorporated an online payment system to compete with Alibaba’s (BABA) Alipay. Later, they associated with other companies to integrate their payment services, including taxi hailing and restaurant booking. Tencent holds the majority stake in JD.com (JD), which allows its users to purchase products using the WeChat app.

Facebook and Yahoo (YHOO) are part of the PowerShares QQQ ETF (QQQ). They account for 4.3% and 0.62% of the ETF, respectively.