The company is relying on productivity enhancements as the only source of volume growth at Western Australia iron ore (or WAIO) in fiscal 2016. This should contribute to BHP’s iron ore annual production target of 290 million tons over time. 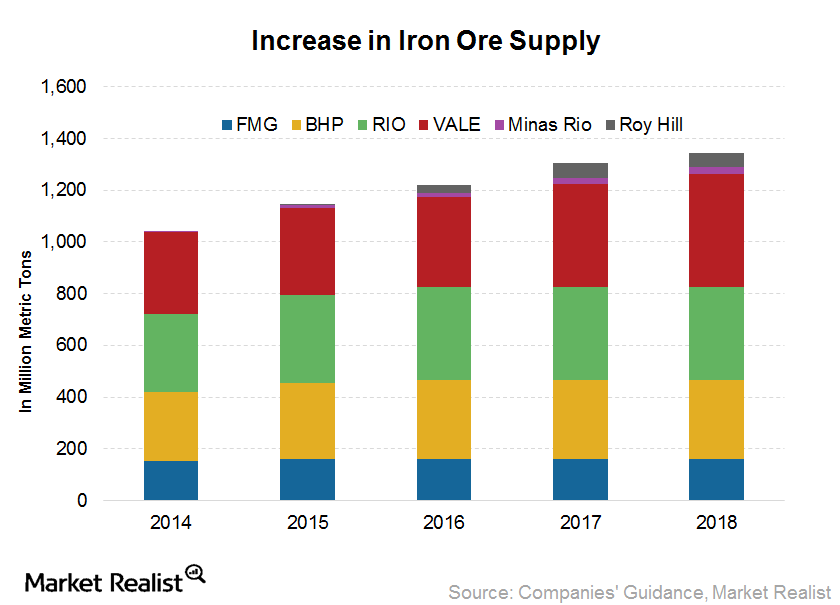 Rio Tinto’s (RIO) guidance for shipments is 350 million tons on a 100% basis for 2016. The company also guided for Pilbara production of 350 million tons in 2017. Other productivity improvements and debottlenecking should contribute toward full capacity utilization of 360 million tons per year over time.

Vale’s S11D could be the game changer

Vale SA’s (VALE) production guidance for 2015 was 340 million tons. However, the company commented that for 2016, the production should be lower than its previous guidance of 376 million tons. The biggest iron ore expansion project currently under progress is Vale’s S11D project, located in the Carajás mining district in the Para region of Brazil.

The S11D project should increase the mining and processing capacity at Vale’s Carajás mining complex by 90 million tons per year to 450 million tons. This area is very rich in iron ore content and produces ~67% iron ore. The expected start date of the project is late 2016, but it should gradually reach its full capacity of 90 million tons.

When Vale’s S11D project comes online, it could be a further game changer in the iron ore market. Its cash costs per ton would be less than $10 per ton. Vale SA forms 1.8% of the iShares MSCI Brazil Capped ETF (EWZ). Fortescue Metals Group (FSUGY) guides for a flat production of 165 million tons for fiscal 2016.

In addition to this, the Roy Hill project from Australia also started shipping iron ore at the end of 2015. When fully developed, it will be a 55 million ton-per-year project.

Based on the supply additions from major miners and new projects, the total supply for iron ore is estimated to increase by 200 million tons from 2016–2018.