Southern Company recorded earnings of $2.44 per share for the nine months ended September 30, 2015. A fourth quarter’s earnings at expected levels could take fiscal 2015’s earnings to $2.87 per share, achieving management’s fiscal earnings target. Southern Company’s management provided 2015 earnings guidance in the range of $2.76 to $2.88 per share. 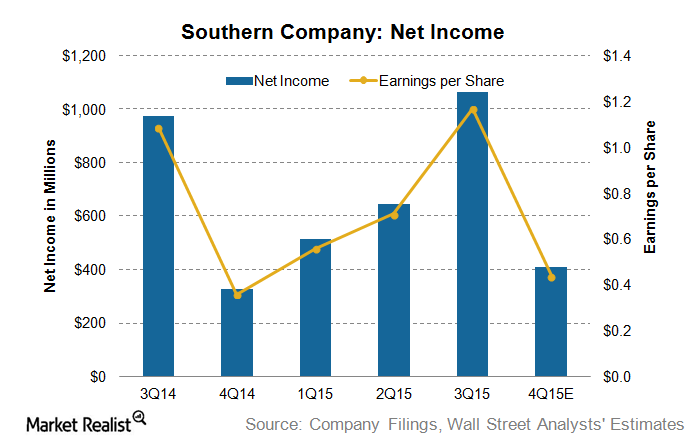 Factors that will drive earnings in 4Q15

Southern Company may report better earnings in 4Q15 than it did in 4Q14. Over the last few quarters, Southern Company has expanded its customer base, which has resulted in improved earnings. Warmer weather has been another important factor in lifting the company’s quarterly earnings.

Vogtle settlement: A sigh of relief

The completion of the Vogtle nuclear plant settlement relieved Southern Company of a significant burden. The Vogtle plant’s frequent cost overruns and project delays were serious concerns. Now that Westinghouse Electric Company has taken over the project, Southern Company management thinks that it is in great shape to be operational in 2019–20. Once the Vogtle and Kemper power plants become operational, the company’s cash flows are expected to improve significantly.