The South Korean won depreciated against the US dollar on January 6, 2016. It came on the back of reports that North Korea may have conducted a nuclear bomb test, possibly a hydrogen bomb that caused an earthquake in the test area. The possible test of a hydrogen bomb increased geopolitical risks in the region and spread jitters throughout the global markets. This was the fourth time since 2006 that North Korea claims to have conducted such a test. It doesn’t seem to reflect a desire for North Korea to surrender its nuclear weapons. 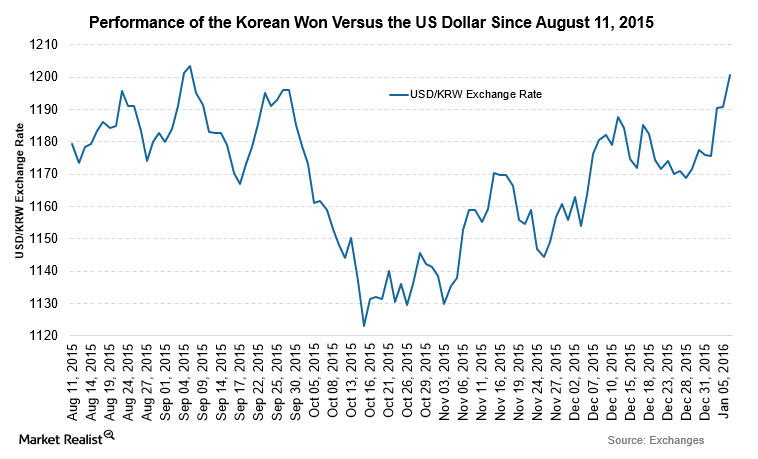 Speculation increased of possible interference by South Korea through its foreign exchange reserves to reduce the fall of the won. China’s Caixin Services PMI (Purchasing Managers’ Index) released at 50.2, below market expectations of 52.3. This put pressure on Asian currency peers, including the South Korean won.

The South Korean won also weakened on Monday, January 4, following an outflow of foreign investments from Asian markets. This came as the PBoC (People’s Bank of China) devalued the Chinese yuan further and its manufacturing PMI released below the threshold level of 50. The fall of the South Korean won was also triggered by a drop in South Korean exports for the 12th consecutive month.