Rio Tinto’s (RIO) Diamond & Minerals segment is going through a rough patch. While titanium dioxide’s feedstock and uranium’s demand remain weak due to high inventories, rough diamonds also face demand weakness due to lower demand from India and China (FXI)(MCHI), high inventory, and very low trade manufacturing margins. So, it’s important to look at Rio’s approach to volume growth and the outlook for this division. 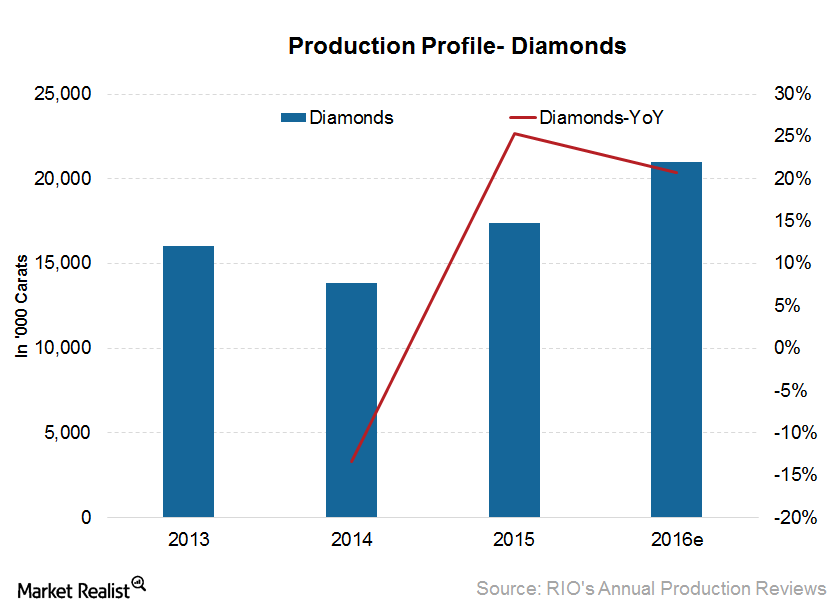 Rio Tinto operates through three diamond assets. They are Argyle, Diavik, and Murowa. Diamonds produced at Argyle were 47% higher YoY (year-over-year) in 2015 and 43% higher YoY at 13.5 million carats. This is due to the continued ramp-up of production from the underground mine.

Diavik’s production, on the other hand, fell by 11% YoY in 2015 and 3% YoY in 4Q15. This was due to pauses in the processing plants and the absence of stockpiled ore. This was done mainly to align the production with current weak market demand.

Rio announced the sale of its interest in the Murowa mine on June 26, 2015. Uranium production in 2015 was 72% higher YoY. This mainly reflected the complete shutdown of processing facilities in the first half of 2014 due to the failure of a leach tank.

ETFs that invest in these companies, like the SPDR S&P Global Natural Resources (GNR), provide diversified exposure to the metals and mining sector. When combined, BHP Billiton and Rio Tinto equal 6.7% of GNR’s assets.