On December 24, 2015, Microsoft’s (MSFT) CMO (chief marketing officer) Chris Capossela put an end to the speculation about the Lumia 650. The Lumia 650 is a new mid-range smartphone that is likely to be priced below the Lumia 950. Capossela, confirming as much as possible about the existence of the Lumia 650, stated that the release date of the phone has not been decided on. 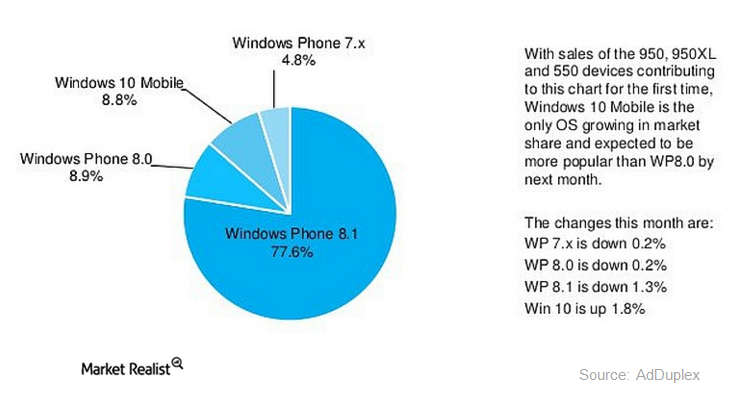 The Lumia 650 is Microsoft’s Windows 10-based low-cost business phone for the masses. The Lumia 640 and Lumia 640 XL were marketed in a similar manner in early 2015. According to Windows Central, Google’s (GOOG) Android and Apple’s (AAPL) iOS platforms combined occupy approximately 97% of the smartphone space.

It’s quite possible that the Lumia 650 will be the last Lumia to be made by Microsoft, as it is aiming to direct its funds and efforts towards the Surface Phone, as discussed earlier in this series.

AdDuplex, Microsoft’s Windows cross-promotion advertising network, which also tracks mobile distribution, stated that Windows 10 mobile usage rose by 1.8% in November 2015 to 8.8%. Considering the profits associated with premium phones, it makes sense for Microsoft to focus on them.

Investors who wish to gain exposure to Microsoft could consider investing in the iShares Russell 1000 Value ETF (IWD). While IWD invests 2.0% of its holdings in Microsoft, it also has an exposure of 3.4% to application software.