Public Service Enterprise Group (PEG) is one of the largest and oldest utilities in North America, delivering electricity and natural gas to millions of customers in New Jersey. PEG’s aging infrastructure has become a serious obstacle in its growth over the last couple of years. It expends huge capital on its transmission infrastructure and maintenance due to its centralized power generation.

Nearly half of the $15.6 billion planned capital expenditure for the years 2015-2019 is expected to be on transmission. PEG’s aggressive spending plan of grid modernization may improve the operational performance of this diversified utility in the medium to long term. 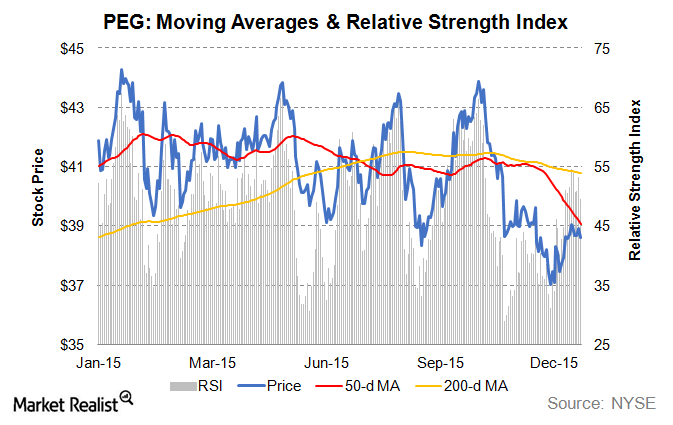 Shares of Public Service Enterprise largely traded in a narrow range around $40 throughout 2015. PEG stock ended last year with a drop of 7%. Many utilities (XLU)(IDU) in the peer group like PPL (PPL) and PG&E (PCG) also corrected ~7% last year.

Currently, PEG is trading below its 50-day and 200-day moving averages by 1% and 6%, respectively, as of January 6, 2016. Sustained pressure on the 200-day moving average depicts a possible bearishness in the stock. The relative strength index is currently poised near 50 levels. It came down sharply after peaking near 70 in the overbought zone in October. The relative strength index is a momentum oscillator with values between 0 and 100. Movements below 30 are considered the oversold zone while above 70 are interpreted as an overbought zone.