Chinese steel production fell by 1.8% year-over-year (or YoY) for the first 11 months in 2015. The operating margins of steel mills have been falling, which led to cuts in production and jobs, as well as closures. It has been plagued by shrinking demand, low utilization, and persistent losses. 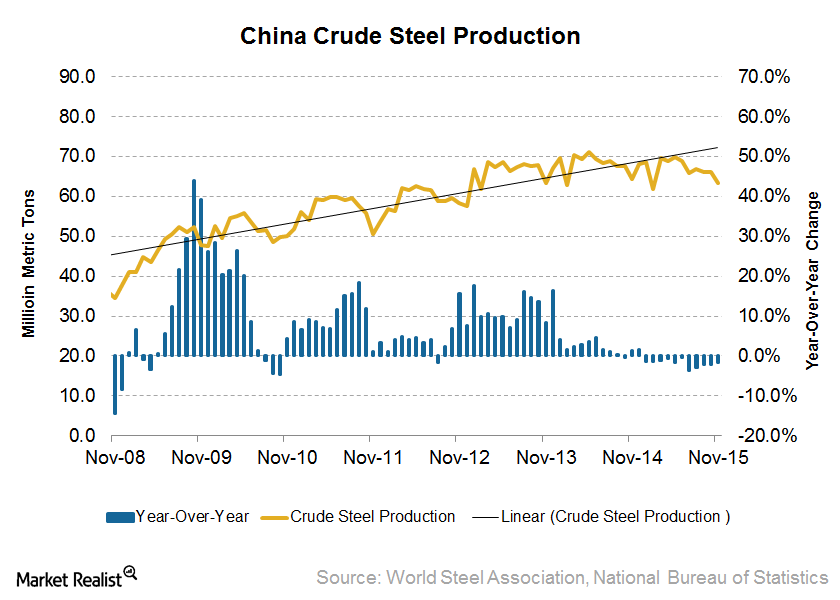 China’s Baogang shut down its third blast furnace in the weak market in 2016. China’s northern Hebei province, which makes a quarter of the country’s steel, has announced that it plans to cut steel output by 8 million tons in 2016. This has been done mainly to address overcapacity and air pollution in the country.

CISA (China Iron and Steel Association) members have shouldered a loss of 38.64 billion yuan ($6 billion) for the first ten months of 2015. According to CISA, “Driven by the continuous fall in steel prices and weakening steel demand, steel production is expected to fall further, so iron ore demand will keep weakening.”

Overcapacity to weigh on utilization

China’s steel industry has annual crude steel capacity of 1.2 billion tons. China produced ~850 million tons of steel in 2015. With China’s “new normal,” domestic demand should fall further in 2016. The inventory in the property sector still remains quite high. This should keep the new construction activity in check, which is weighing on steel demand.

China’s steel exports grew by 20% YoY in 2015. They are unlikely to grow much further due to increased trade cases from US (VTI) and Europe (VGK). This should see the capacity utilization declining for the China’s steel sector going forward in 2016.

There is no significant market to take the iron ore baton from China, which should keep the pressure on iron ore producers such as BHP Billiton (BHP) (BBL), Rio Tinto (RIO), Vale SA (VALE), and the Asia-Pacific division of Cliffs Natural Resources (CLF).