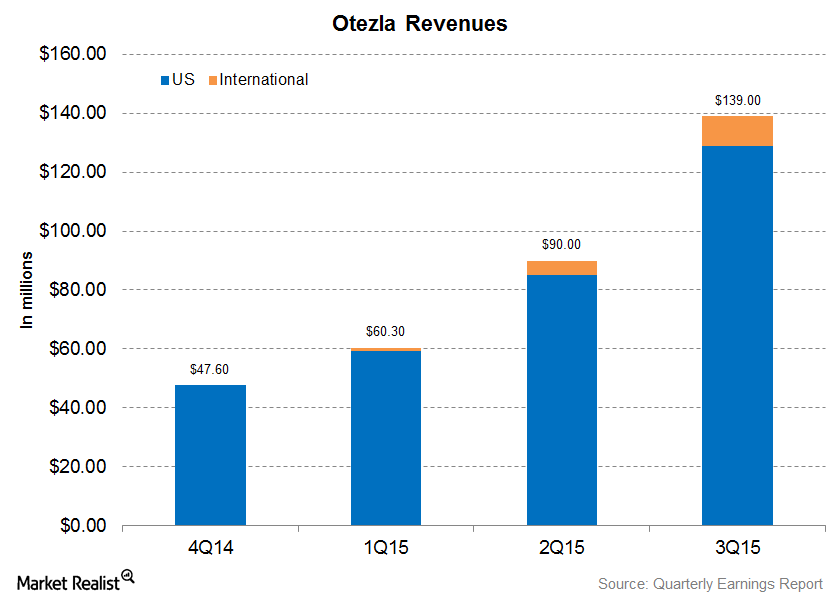 The above graph reflects revenues of Otezla in the United States and in international markets since 4Q14.

Otezla is gaining market share. It’s poised to give good competition to AbbVie’s (ABBV) Humira and Johnson & Johnson’s (JNJ) Stelara and Enbrel, which is jointly marketed by Amgen (AMGN) and Pfizer (PFE). Analysts are expecting ~$169 million in revenue for 4Q15 from Otezla. They expect revenue to grow, as it will be launched in Canada, Germany, and other European countries.

Celgene has a strong pipeline, and clinical trials activity can be seen across its portfolio. Below is an updated status of Celgene’s key clinical trials:

On December 6, 2015, at the 57th American Society of Hematology Annual Meeting, Celgene announced nearly 30 combination studies. They include immunomodulatory drugs, Revlimid, and Pomalyst for patients with multiple myeloma.

The Power Shares QQQ ETF (QQQ) holds 1.6% of its portfolio in Celgene.