NextEra Energy (NEE) will announce its quarterly earnings for the period ended December 31, 2015, on January 28, 2016. Wall Street analysts estimate that NextEra’s net income may rise to $500 million against $460 million in the fourth quarter of the prior year. This amounts to a year-over-year rise of 8% in the earnings. The expected earnings translate to $1.1 per share in 4Q15 as compared to $1 per share in 4Q14. 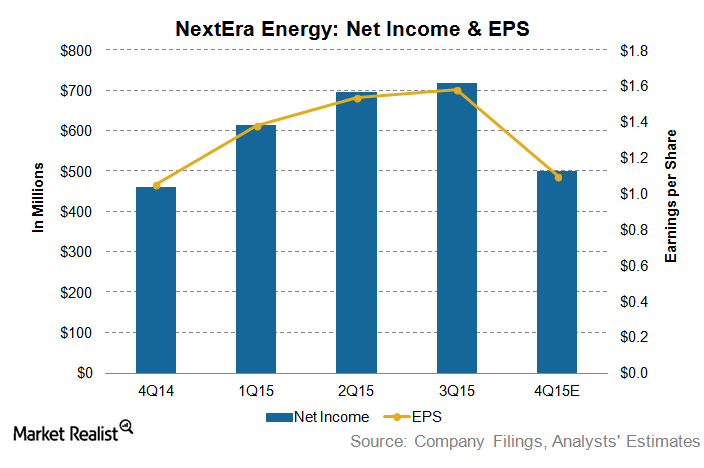 The projected earnings of $1.1 per share for 4Q15 fall in line with the management’s guidance for the earnings of 2015. In the 3Q15 earnings release, NextEra Energy’s management reiterated that its 2015 earnings are expected to be in the upper half of the $5.40–$5.70 per share range.

It appears that 2015 was better for NextEra Energy as compared to 2014 due to greater customer usage and the customer base growth. The rise of $489 million in NEE’s net income in 3Q15 was primarily triggered by a 7.8% rise in regulatory capital as compared to 3Q14. This rate of growth in regulatory capital employed was higher than that in the first two quarters of 2015.  Also, NEE expects another rise in the fourth quarter. This may further positively impact NEE’s net income in 4Q15. Regulatory capital is the capital invested by a utility (IDU) in its service territory. Based on this, the utility files rate cases for revenue requirements to regulators.

NextEra Energy expects a compounded annual growth of 6%–8% in its adjusted earnings per share through 2018. It’s aggressively raising its renewables portfolio with a focus on wind generation facilities. It’s already the largest power generator by both wind and solar energy in the Unites States.

By 2019, NEE expects to invest ~$15 billion, particularly to add both wind and solar generation facilities. Given the strong focus on regulated operations, NextEra’s earnings are expected to rise steadily. Earnings from regulated operations rose from 58% in 2011 to 66% in 2015.

The performance of utilities is gauged by the Utilities SPDR ETF (XLU). NextEra Energy is XLU’s top holding, with the ETF investing 9% of its total portfolio in NextEra. Duke Energy (DUK) and Southern Company (SO) are other major holdings in XLU. The ETF invests ~8% of its portfolio in each of them.