Focused drilling in the Anadarko Basin

Newfield Exploration (NFX) is focusing on drilling and developing its asset base, especially the STACK and SCOOP plays in the Anadarko Basin, where it has seen strong performance. The company allocated 70% of its 2015 capex (capital expenditure) budget toward this region.

Discussing 2015 production levels during NFX’s 3Q15 earnings conference, Lee Boothby, NFX’s chairman and CEO (chief executive officer), said, “Our Anadarko Basin volumes will be up nearly 50% over 2014 levels. We enter 2016 with momentum and expect that the continuing growth of SCOOP and STACK in 2016 will more than offset the natural declines in our other domestic areas that are not receiving capital investments today.” 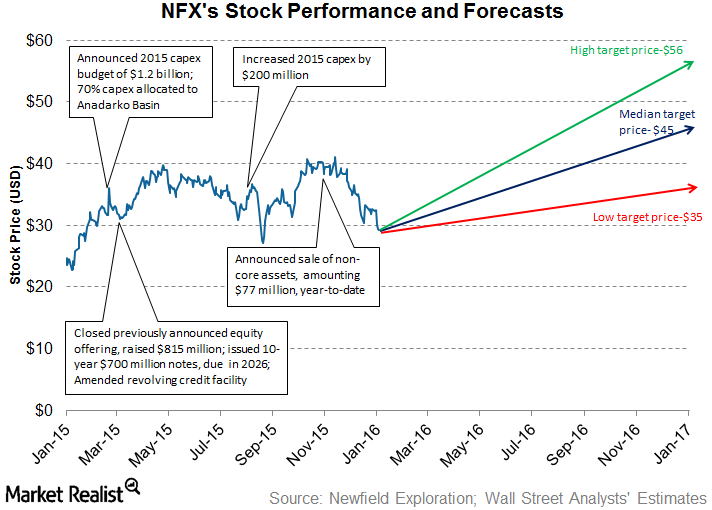 Early in 2015, NFX raised $815 million via equity offerings. These proceeds helped it to pay off its previous credit facility. The company has now increased its available borrowing capacity under its five-year revolving credit facility by $400 million, to $1.8 billion. It has also extended the term by two years, resulting in a new maturity date of June 2020.

NFX also issued $700 million of 5.4% senior notes, due in 2026. The proceeds were used to redeem its 6.9% notes, due in 2020. Larry Massaro, NFX’s CFO (chief financial officer), said in a press release, “These transactions ensure we will have ample liquidity and financial flexibility to execute our near-term strategies and deliver ‘through cycle’ value to our stockholders.”

We’ll discuss NFX’s balance sheet and liquidity position in more detail later on in this series.

Devon Energy (DVN) announced a capex reduction of ~20% compared to 2014. These companies combined make up ~2.8% of the Vanguard Energy ETF (VDE).

The above graph notes high, low, average, and median analyst target prices for NFX. The consensus target price of ~$45 indicates positive returns of about ~55% compared to current levels over the next 12 months.