Newfield Exploration’s (NFX) 3Q15 enterprise value (or EV) to adjusted EBITDA (earnings before interest, tax, depreciation, and amortization) ratio was ~5.8x. EV is the sum of a company’s market capitalization and net debt. 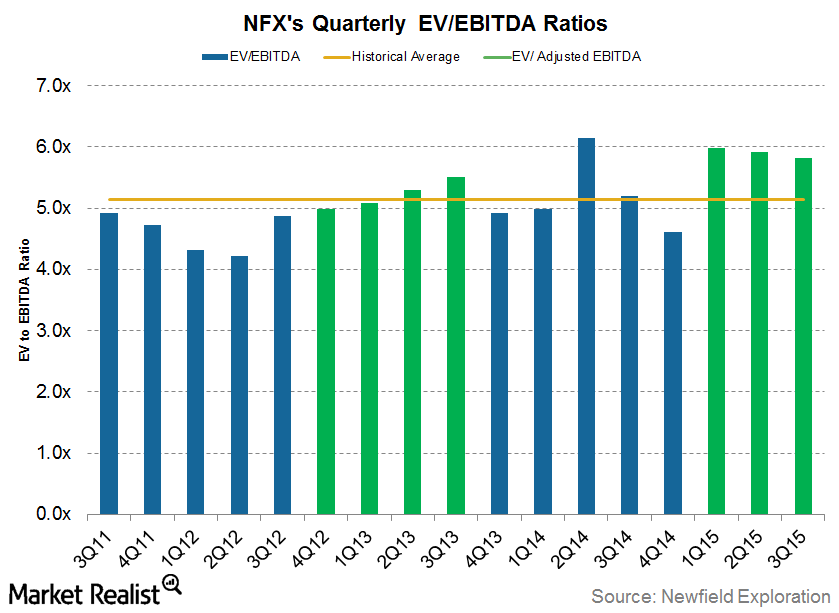 The company’s trailing-12-month EBITDA as of 3Q15 fell ~9% year-over-year. Because its EBITDA fell more than its net debt, NFX’s net debt to-EBITDA multiple rose in 2015.

NFX’s forward EV-to-EBITDA multiple, which uses market expectations for the company’s EBITDA for the current year, is ~6.3x. The higher forward multiple indicates that Wall Street expects NFX’s EBITDA to fall this year compared to the last 12 months. It also indicates that Newfield Exploration could continue to trade at a premium compared to its historical levels.

Other upstream companies including Devon Energy (DVN), Hess (HES), and ConocoPhillips (COP) also saw lower EBITDA levels in 2015 compared to 2014 due to lower crude oil and natural gas prices. These companies’ 3Q15 EBITDAs for the trailing 12 months fell by ~20%, ~60%, and ~67%, respectively, compared to 3Q14. These companies combined make up ~7% of the Energy Select Sector SPDR ETF (XLE).

As of December 31, 2014, Newfield Exploration had total proved reserves of ~645 million barrels of oil equivalent. According to NFX’s 10-K filing, the discounted value of its reserve base at the end of 2014 was $6.2 billion. This would be lower today, given the lower price of crude oil.

In the next part of this series, we’ll look at NFX’s relative valuation.