Netflix (NFLX) launched in Japan (EWJ) in 2015, the company’s first entry into a major Asian market. Netflix stated at the UBS (UBS) Global Media and Communications Conference held on December 7, 2015, that considering that Japanese viewers watched Japanese programming 95% of the time, Netflix’s Japanese subscribers are streaming 30%–50% of their content in English. For example, Bill Murray’s Christmas special is among the top ten programs in Japan.

Other Netflix shows that are proving to be immensely popular in Japan include The Daredevil, Narcos, and Jessica Jones. An original Netflix movie, Beasts of No Nation, which premiered on the streaming service, was the most-watched movie in Japan upon its launch. 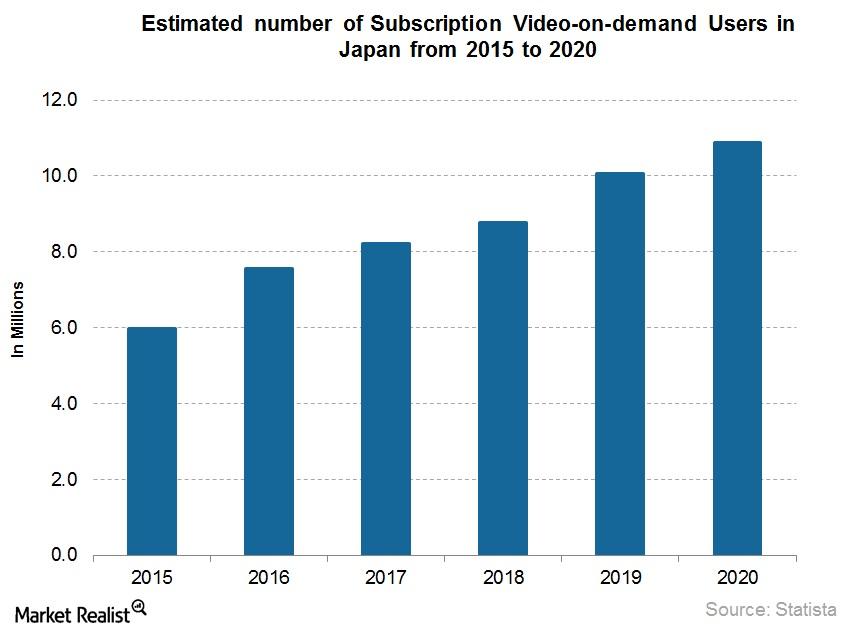 According to a survey by Statista, and as the chart above indicates, the number of subscription video-on-demand (or SVOD) users is estimated to be ~11 million in Japan by 2020. Considering Netflix’s entry in Japan, the rising popularity of online video could help the company immensely in the long term and could grab this subscriber base.

Why is Netflix’s entry into the Japanese market important?

Netflix’s entry into Japan was important for the company, as Netflix considers Japan to be a brand-sensitive market. Once the company establishes its brand in Japan, it expects its connection with the Japanese audience to be a long-term one.

Netflix has priced its Japanese service at a price point close to its pricing in the United States. Netflix is offering subscription plans in Japan that range from 650 yen (or ~$5.40) pretax to 1,450 yen (or ~$12.02) pretax.

Netflix learned from Hulu’s initial failure in Japan. Hulu was expensive, at around 2,000 yen, or $20 per month, and it didn’t offer any local content. In 2014, Hulu’s Japanese business was sold to Nippon Television Network. Hulu is an over-the-top (or OTT), ad-supported streaming service owned jointly by 21st Century Fox (FOXA), The Walt Disney Company (DIS), and NBCUniversal (CMCSA).

Netflix makes up 0.92% of the PowerShares QQQ Trust Series 1 ETF (QQQ). For an investor interested in exposure to the Television & Radio sector, QQQ has an exposure of 4.37% to the sector.