Month-over-month, the natural gas production growth rate in the Marcellus Shale has gradually fallen in the past six months. 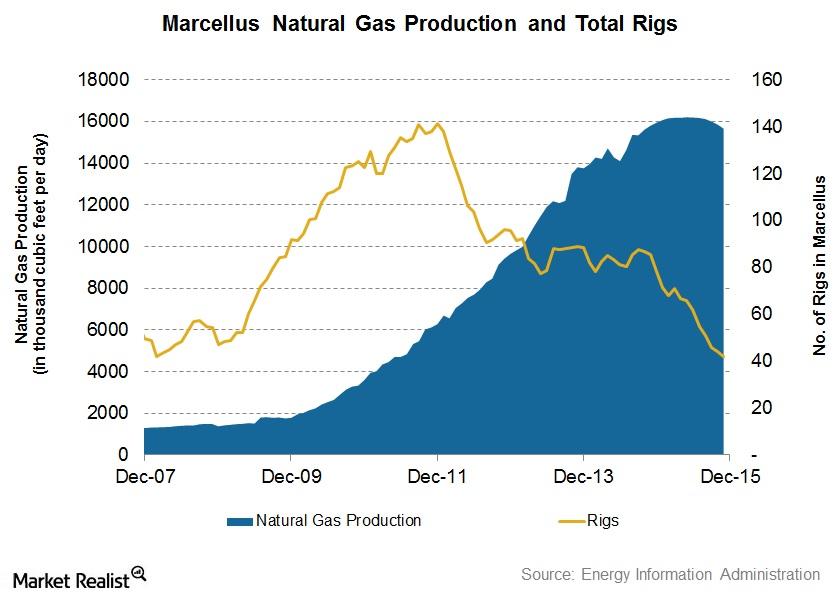 The number of active rigs in the Marcellus Shale fell from 44 in November 2015 to 42 in December 2015. A year ago, there were 85 drilling rigs in the region.

The EIA calculates that the average Marcellus Shale rig added production of 8.8 million cubic feet of natural gas in December 2015, a 13% gain since December 2014. In the past eight years, the shale has seen a ~15x gain.

What it means for OFS companies

Lower Marcellus Shale rig count in the past year hurt oilfield equipment and service (or OFS) providers like Weatherford International (WFT), National Oilwell Varco (NOV), Cameron International (CAM), and FMC Technologies (FTI). However, higher production and drilling productivity have benefited the OFS companies. NOV makes up ~1% of the Vanguard Energy ETF (VDE). VDE is an ETF tracking an index of large, mid-size, and small US companies within the energy sector.

In the next part of this series, we’ll look at drilling efficiency in the Eagle Ford Shale.