Falling crude oil and natural gas prices over the last year have been dragging the entire upstream sector down. Murphy Oil’s (MUR) stock price is in a steep downtrend in which it’s seeing both lower highs and lower lows. 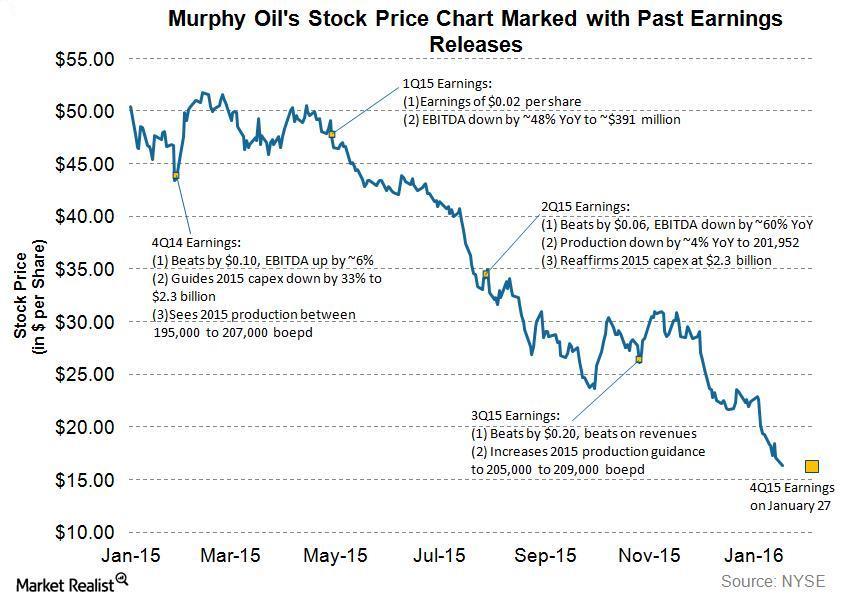 MUR has shown very little relative strength and has been sold off heavily in comparison to other upstream stocks. In the last two months, MUR’s stock price has fallen by ~47%.

MUR&#x2019;s stock price performance after its past earnings

MUR reported its 3Q15 earnings after the market close on October 28, 2015. In 3Q15, excluding one-time items, MUR reported a loss of $0.72 per share, $0.20 better than analysts’ consensus estimates for a loss of $0.92 per share. Following its earnings release, MUR’s better-than-expected earnings saw its stock price rise by ~15% in just six sessions.

A similar upward reaction was observed after MUR’s 4Q14 earnings, when its stock price rose by ~19% in just eleven sessions after beating consensus earnings estimates by $0.1 per share.

Contrary to the above two occasions, MUR’s 1Q15 and 2Q15 post-earnings reactions were decidedly negative, mainly due to falling crude oil and natural gas prices.