Valero Energy Corporation’s (VLO) stock price, amid volatility, has risen in 2015, and the stock gained by 43% in the trailing-twelve-month period as of January 19, 2016.

In October 2015, Valero’s stock price surged steeply. This was on the back of better than estimated 3Q15 results. Plus, VLO announced a rise in dividend by 25%, pushing up the stock price.

But in December 2015, the stock lost quite a bit of its gains. From December 1, 2015, to January 19, 2016, VLO’s stock lost 8%. This was on the back of the abolition of the crude oil export ban in the US, which raised fears of a fall in the refining margin of US refineries. During the same period, Valero’s peers Marathon Petroleum Corporation (MPC), Tesoro Corporation (TSO), and Phillips 66 (PSX) lost 31%, 24%, and 15%, respectively. 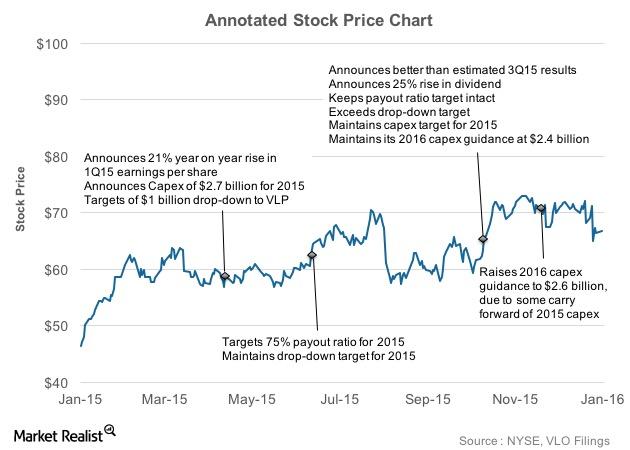 In 2015, Valero Energy was expected to incur a capital expenditure, or capex, of $2.7 billion, of which $1.2 billion was for growth projects. The capital expenditure was aimed at increasing feedstock flexibility, yielding higher value products, sustaining growth, and improving logistics capabilities.

During the first nine months of 2015, Valero had incurred $1.7 billion capex. What remains is likely to be incurred in 4Q15. But the company has recently offered guidance that some portion of its 2015 capex will likely spill over to 2016. Hence, the company’s 4Q15 capex could likely to be lower than expected. In 2016, Valero plans to incur capex of $2.6 billion, which should include some of its 2015 backlog.

For exposure to VLO, MPC, and PSX, you might consider the PowerShares Dynamic Large Cap Value Portfolio (PWV), which has ~10% exposure to energy sector stocks.

In the next and final part of this series, we’ll look at Valero’s most up-to-date analyst ratings.