Cliffs Natural Resources (CLF) is operating its Asia Pacific Iron Ore, or APIO, segment until it’s sold out. The remaining life left for this operation is less than three years. 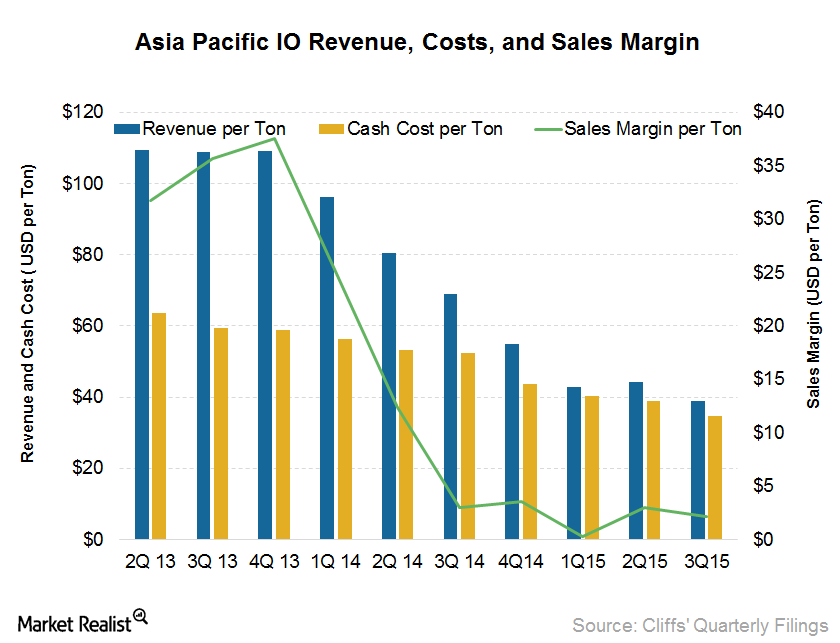 The Seaborne iron ore trade has been hit hard by a supply glut from these players along with weak demand from China. The benchmark seaborne iron ore prices fell by 21% quarter-over-quarter in 4Q15. Thus, realized prices for the APIO segment are not expected to be higher the 3Q15 price of $39 per ton.

On the other hand, costs could benefit from the depreciating Australian dollar against the US dollar as well as lower freight costs. While cash costs per ton for the APIO segment were $34.30 per ton in 2Q15, they were just $26.9 per ton in 3Q15. The reduction was mainly due to reduced mining and administrative costs.

Since the Australian dollar remained weak compared to the US dollar (UUP) in 4Q15, there’s potential for the APIO segment’s cash costs to fall even further.

Cliffs Natural Resources increased the volume guidance for its APIO segment from 11 million tons to 11.5 million tons for 2015. The guidance for cash cost of goods sold is $35–$40 per ton. This is mainly due to the favorable exchange rate between the Australian dollar and the US dollar.

Investors who don’t want to invest in individual companies can invest in ETFs such as the SPDR S&P Metals and Mining ETF (XME), which gives diversified exposure to the metals and mining space. CLF forms 3.6% of XME.