AISC (all-in sustaining costs) are quite an encompassing measure that you can use to compare across miners. This is a crucial metric for investors to watch. It shows the company’s margin cushion at prevailing gold prices (GLD) (IAU). You can read Everything you need to know about gold and gold companies to learn more about AISC. 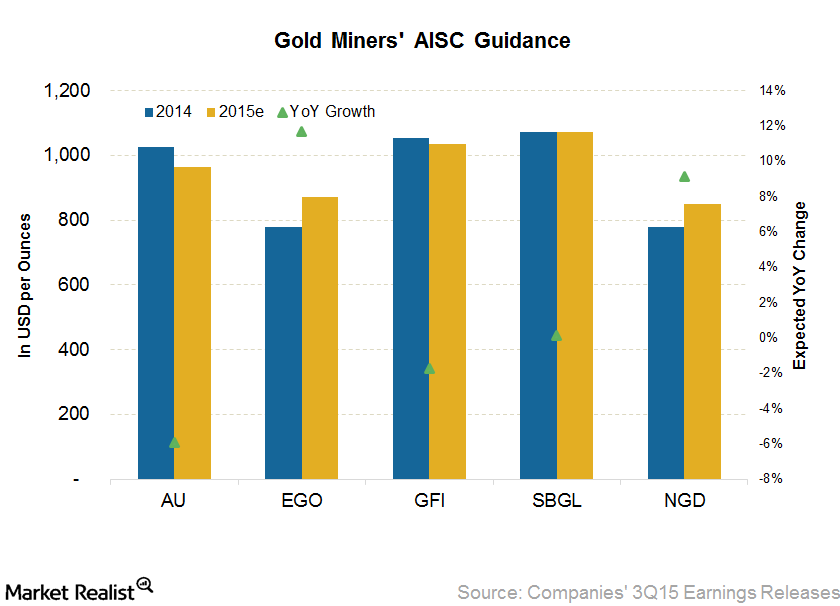 New Gold (NGD) has one of the lowest cost profiles among intermediate gold miners. However, its costs have been rising recently, and it has also raised its AISC guidance for 2015 by 11% to $850 per ounce. The rise in costs was on the back of higher production coming from higher cost heap-leach mines.

In addition to the rise in production guidance for 2015, as we saw in the previous article on production, Eldorado Gold (EGO) reduced its AISC guidance by 6% to $870 per ounce. Eldorado falls in the lower quartile as far as its cash costs are concerned.

AngloGold Ashanti’s (AU) AISC fell substantially due to the fx benefit. As we previously discussed in our article on geographic exposure, its costs are incurred in currencies such as the Australian dollar, Brazilian real, and South African rand. Note that all fell substantially in 2015. This is the main driver behind the company’s anticipated 6% reduction in the AISC for 2015 versus those for 2014.

Sibanye Gold (SBGL) is a producer with higher costs when compared to many of its peers (GDX). One major factor is its use of more labor-intensive technology, as the South African government promotes the use of such technologies against more automated options. Among the five companies, Sibanye Gold has the highest AISC at $1,073 per ounce in the guidance for 2015.

Gold Fields’ (GFI) productivity rose since it spun-off its South African operations as they were relatively more labor-intensive. Its AISC for 2015 could fall by 2% to $1,035 per ounce.