Hess’s (HES) stock has mostly been on a falling trend since May 2015. It accelerated at the beginning of 3Q15. Weaker crude oil prices in the third quarter were the major reason behind this. HES saw a brief upward trend in the period from October to December. However, as crude oil prices started to spiral in early December, falling below $40 per barrel, stock prices went south for the upstream company. 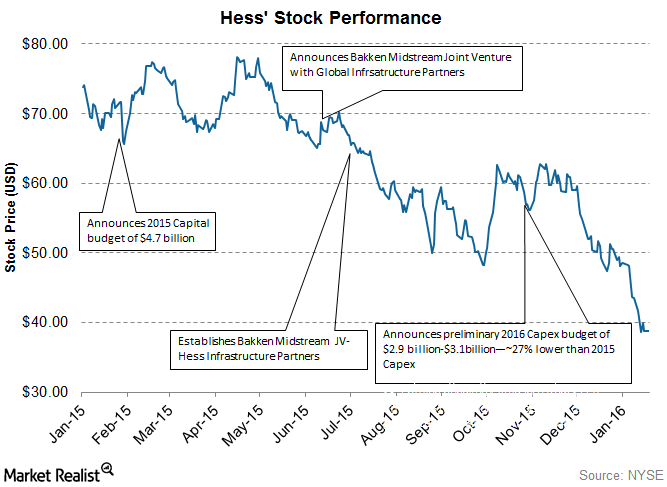 Year-over-year, Hess’s stock fell by ~48%. Additionally, most energy stocks fell this year. This was born out of the crude oil price crash since June 2014. Note that crude prices have fallen ~65% since then.

Amid weak crude oil prices, Hess—like many other shale players—spun off its non-core midstream Bakken assets to form a joint venture with the private equity group Global Infrastructure Partners. HES owns 50% in the venture.

In Hess’s 3Q15 earnings conference call, it commented that maintaining a strong balance sheet is the first priority for the company. It added, “Our priority here is to keep our strong balance sheet strong and that comes first before anything else. So at the end of the day we’re cutting our Capex if we don’t think it makes sense to accelerate production in this environment.”

Many oil and gas companies have slashed their 2015 capex (capital expenditure) in response to the weakness in crude oil prices. Apache (APA) and Anadarko Petroleum (APC) slashed their 2015 capex by ~65% and ~33%, respectively, compared to 2014. Marathon Oil (MRO) also announced a capex reduction of ~40% compared to 2014. These companies together make up ~5% of the Energy Select Sector SPDR ETF (XLE).