Halliburton Company (HAL) released its fiscal 4Q15 financial results on January 25, 2016. The company recorded total revenues of nearly $5.1 billion in the fiscal quarter, but this was down by 42% from the nearly $8.8 billion recorded during its previous quarter, fiscal 4Q14. Halliburton’s revenues for the latest quarter decreased mostly due to the slowdown in its North American rig count and drilling operations. 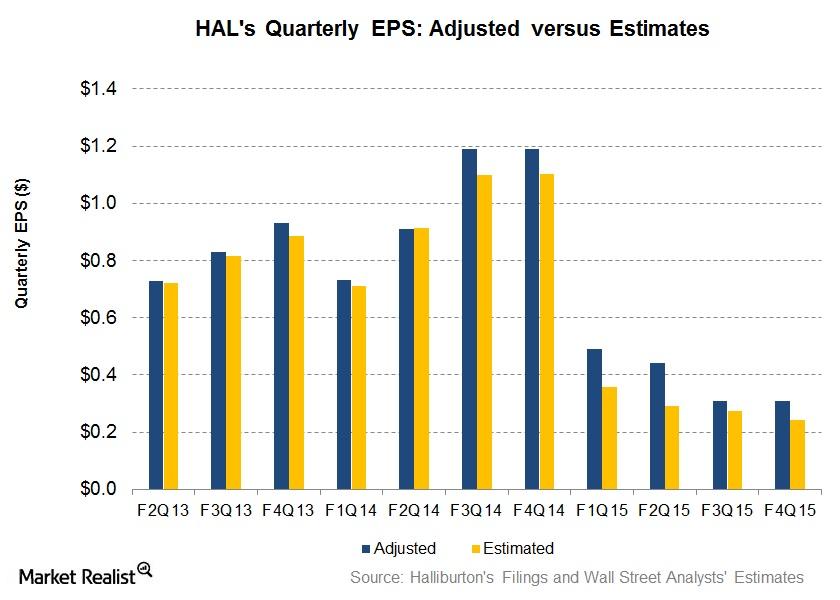 As the graph above shows, Halliburton’s adjusted EPS exceeded estimates in recent quarters. On average, Halliburton beat Wall Street estimates by approximately 9% over the past 11 quarters. Halliburton makes up about 3.1% of the SPDR S&P Oil & Gas Equipment & Services ETF (XES). Investors looking for exposure to the OFS (oilfield equipment and services) industry should bear in mind that XES has about 73% of its total portfolio in OFS.

In fiscal 4Q15, Halliburton recorded a $28 million net loss. Compared to fiscal 3Q15, when the company reported a $54 million net loss, these earnings, in fact, show improvement over the previous fiscal quarter. The two biggest factors that resulted in net losses for the company include the following:

We should bear in mind as well that Halliburton’s proposed merger with Baker Hughes (BHI), as announced in November 2014, is still pending. On January 12, the European Commission initiated further review (or Phase II) into the proposed acquisition transaction.