The following graph illustrates the performances of the component sectors of the SPDR S&P 500 ETF (SPY) as of January 21 in percentage form. 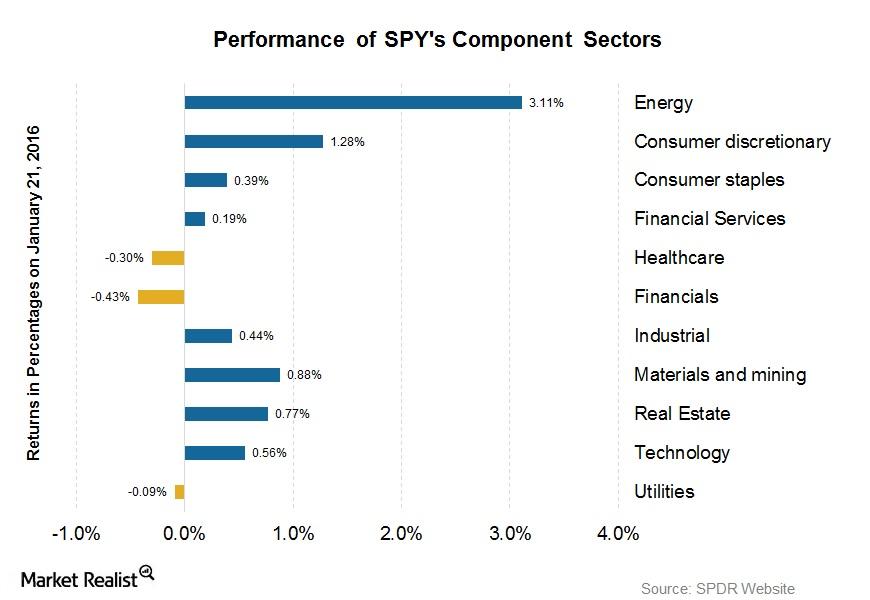 As we can see, the energy sector was at the lead with a gain of 3.1%, followed at a distance by the consumer discretionary sector and the materials sector.

Is the gain in US equities temporary?

The European Central Bank (or ECB) kept its key interest rates unchanged in its meeting on Thursday, citing poor inflation dynamics, the slowdown in global growth, and the oil price slump. ECB President, Mario Draghi, stated on Thursday, that the bank’s officials will review its monetary policy in its March meeting in the wake of slowing Chinese economic growth and its impact on the world. It also expressed its support in getting out of the current financial turmoil and boosting the economic cycle, suggesting more monetary stimulus in the form of interest cuts or extensions to the bond-buying program.

The Vice President of China, Li Yuanchao, said that the government will intervene and “boost regulation to bring down the market volatility.” The People’s Bank of China took an aggressive stance, offering short-term loans worth 400 billion yuan to commercial lenders as one of its attempt towards monetary easing. This support from central banks boosted investor confidence in US equities.

However, the financial market turmoil has had a $15 trillion impact of global equities. It will take time for oil prices to resume their correct value and it will be possible only when a balance between demand and supply is achieved. This suggests that the rebounds in oil prices and equities are temporary, as they are based on investor sentiments.

In the next article, we’ll look at the performance of the material sector.