Ecolab and its peers

In this article, we’ll compare Ecolab to its industry peers as of January 6, 2016. First, let’s compare Ecolab (ECL) and its peers based on PE (price-to-earnings) ratio: 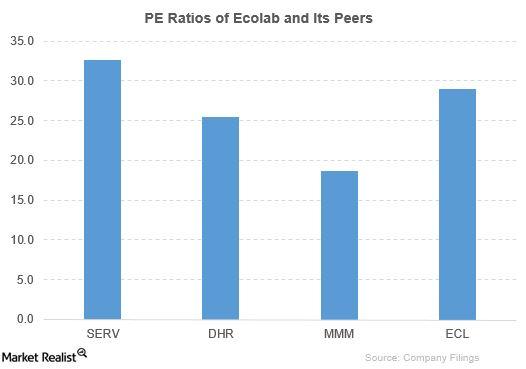 According to the above findings, Ecolab’s peers have mostly outperformed Ecolab based on PBV. However, Ecolab has outperformed most of its peers based on PE.

ETFs that invest in Ecolab

The PowerShares Water Resource Portfolio (PHO) invests 7.5% of its holdings in Ecolab.

The Materials Select Sector SPDR ETF (XLB) invests 6.1% of its holdings in Ecolab. The ETF tracks a market-cap-weighted index of US basic materials companies. The fund includes only the materials components of the S&P 500.

The iShares Dow Jones US Basic Materials Sector ETF (IYM) invests 6.1% of its holdings in Ecolab. The ETF tracks a broad, market-cap-weighted index of US basic materials companies that include coal companies.

Comparing Ecolab and its peers

Now let’s look at ECL compared to its ETFs:

According to the above findings, these ETFs have outperformed Ecolab based on price movement and PE. However, Ecolab is ahead of its ETFs based on PBV.