Simplicity is the biggest advantage

The simplicity of the Dogs of the Dow strategy is its biggest advantage. The strategy doesn’t involve any technical or fundamental analysis and can be easily followed even by investors new to the markets. The other major advantage of the strategy is investor discipline. Many individual investors either tend to get spooked by market down times and liquidate their positions too early or buy too high and are forced to sell low in a bid to beat the markets. Since the strategy revolves around buying and holding select high-dividend-yielding stocks for a minimum of one year, investors are forced to maintain discipline.

The above graph shows the Dogs of the Dow for 2015 ranked according to their dividend yields on December 31, 2014. The companies included the following:

AT&T was replaced by Proctor & Gamble (PG) in March 2015, as the stock was taken out of the DJIA (Dow Jones Industrial Average) to make room for Apple (AAPL). 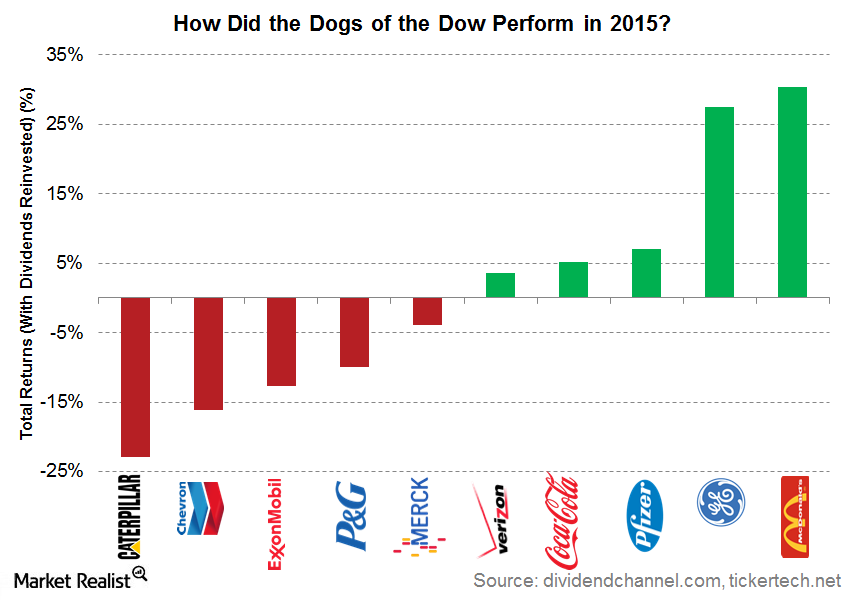 How did the Dogs of the Dow perform in 2015? That was a gloomy year for the DJIA, which closed out the year with an annual decline of 2.2%, the first time it has done so since 2008. According to the Bespoke Investment Group, the Dogs of the Dow strategy managed to stay in the green by giving returns of 2.6% in 2015, including dividends. The DJIA managed only a 0.2% return inclusive of dividends over the year. The S&P 500 yielded 2.4% inclusive of dividends.[1. Bespoke, Zacks]

The above graph shows the returns given by the ten Dogs in 2015, inclusive of dividend reinvestment income. The slump in the energy sector (XLE) (IYE) took a toll on oil and energy stocks.

Caterpillar was the worst performer among the Dogs, posting an annual decline of ~23%. The weakness in the mining industry, the strength of the US dollar, and the slowdown in China all contributed to the bleak performance. Caterpillar reported a decline in global retail sales of 11% for the three months ended November 2015. The downward trend has been at play for a whopping 36 consecutive months.[2. Caterpillar Monthly Retail Statistics] Chevron (CVX) and Exxon Mobil (XOM) were also deeply affected by the oil price rout and returned -16.2% and -12.8%, respectively, in 2015.

McDonald’s (MCD) was literally the top Dog (pun intended) when it came to annual returns for 2015. The stock returned an amazing 30.4% over the year. After three years of lackluster earnings reports, the company finally came through in 2015 under CEO (chief executive officer) Steve Easterbrook’s leadership. Policy changes, including leaner menus, the all day breakfast policy, and the McPick 2 menu that focuses on cheap ticket food items, caused a resurgence in earnings and thus stock prices. General Electric (GE), with an impressive annual return of 27.5%, was the second-best performer among the Dogs.