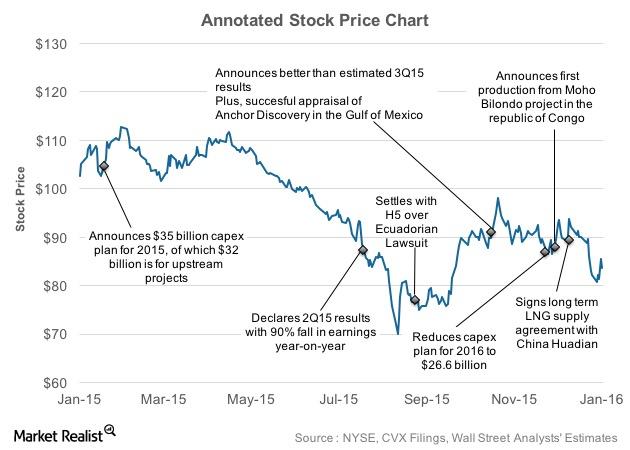 However, there was some respite for CVX in the latter half of the year. There were a series of announcements from Chevron (CVX) in October 2015 that led the stock to gain ground. Chevron announced the successful appraisal of the Anchor discovery, declared quarterly dividends, and posted results in 3Q15 that were better than estimated. But, in December 2015, CVX announced a cut in its capital spending plan for 2016. This led the stock to move down again.

In 2015, Chevron Corporation (CVX) was expected to incur capex (capital expenditure) of $35 billion. The bulk of that capex was toward upstream projects. In the first nine months of 2015, CVX had incurred a $25.3 billion capex. Also, the remaining capex was likely to be incurred in 4Q15. In 2016, Chevron plans to incur a capex of $26.6 billion, or lower than the level in 2015.

Chevron aims to lower its cost structure to sustain at lower levels in the oil price cycle. Recent moves like downsizing the employee workforce and a reduction in capex are aimed at cost optimization. Going forward, Chevron (CVX) focuses on the execution of ongoing projects to yield higher production and cash flows.