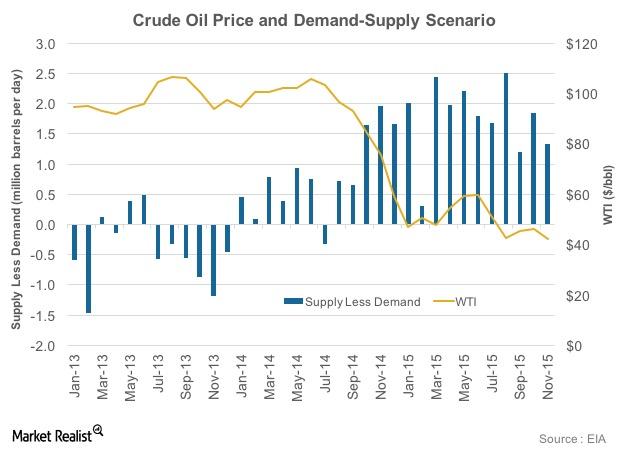 This included no respite from higher OPEC[1. Organization of the Petroleum Exporting Countries] output, weaker growth numbers from China, and the buildup of total petroleum stocks in the United States. The last nail in the coffin was a lowering of global growth estimates by the World Bank.

What do all these events mean? They point toward a global supply glut of crude oil. As per the EIA (U.S. Energy Information Administration), in November 2015, supply exceeded demand by 1.3 MMbpd (million barrels per day).

On the other side, slow growth in demand is unable to cover up the demand and supply gap. According to the World Bank, the global economy is expected to grow by 2.9% compared to an estimated growth of 3.3% in June 2015, led by the contraction in the Brazilian and Russian economies. Plus, the slower Chinese growth is pressurizing oil demand further. The Caixin-Markit PMI (purchasing managers’ index) for Chinese non-manufacturing activity fell to 50.2 in December 2015, indicating a slowdown in the services sector in the country.

A lower oil price is likely to impact the Energy Select Sector SPDR (XLE). The ETF has mixed exposure to integrated energy players like ExxonMobil (XOM) and Chevron (CVX), as well as to upstream companies like ConocoPhillips (COP) and EOG Resources (EOG), not to mention downstream firms like Marathon Petroleum (MPC) and Valero Energy (VLO).