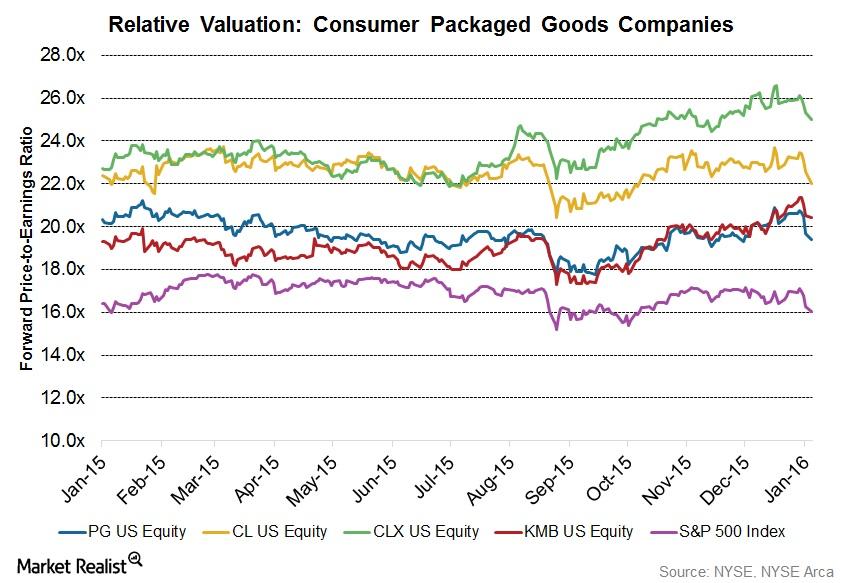 In comparison, the S&P 500 Index and the Dow Jones Industrial Average are trading at forward PE multiples of 16.0x and 14.7x, respectively. All of the valuations are as of January 6, 2016.

Due to Procter & Gamble’s foreign currency impacts in calendar 3Q15, the valuation fell by 4.9% since the beginning of 2015. Procter & Gamble’s sales growth fell by 5.3% mainly due to currency headwinds. However, Kimberly-Clark’s valuation rose by 7.9% since the beginning of 2015 despite the stronger US dollar. This was primarily due to volume growth in China, Eastern Europe, and Latin America.

Other companies like Colgate-Palmolive (CL) and Clorox (CLX) are trading at PE multiples of 22.3x forward earnings and 25.7x forward earnings, respectively. Colgate’s valuation fell by 2.7% since the beginning of 2015. This was due to lower sales growth of 0.8% and a lower share of toothbrushes in the Africa or Eurasia region.

Clorox’s valuations are higher than its peers. Its calendar 3Q15 revenue rose by 6% excluding foreign currency swings. The company has the highest sales growth of 2.6% compared to its peers for the trailing 12 months. The valuation rose by 11.5% since the beginning of 2015.

As the industry struggles with the impact of the stronger US dollar, higher pricing in developing economies offered better prospects. The growing population and rising disposable income in emerging markets act as top-down growth catalysts for the industry.