Energy is a key raw material in the metals and mining industry. Energy can form almost 20% of copper’s production costs. The copper industry uses a lot of diesel in the production process. 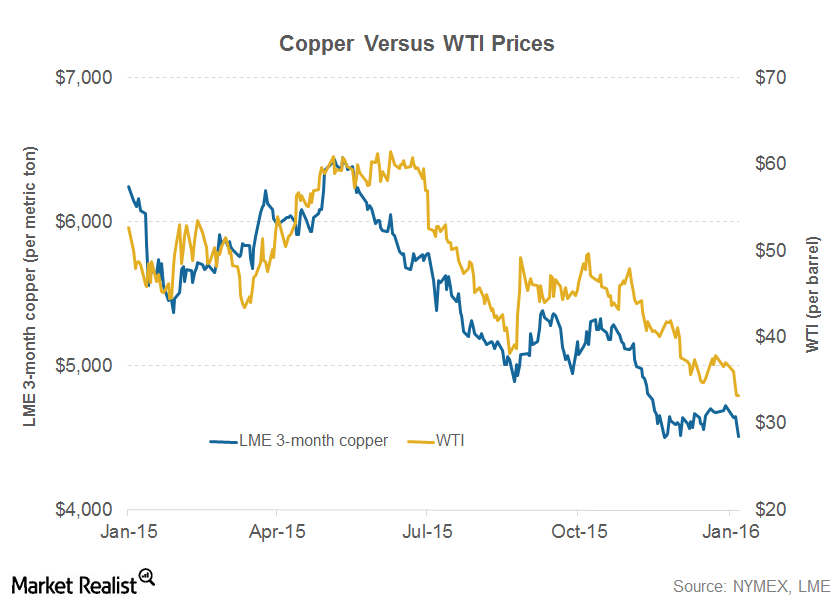 The graph above shows the movement in copper versus WTI (West Texas Intermediate) prices. When the input prices fall, there is room for metal prices to fall more, especially under the current slowdown where metal prices are getting closer to the cost curves.

With crude oil prices trading near 11-year lows, there is potential for copper’s unit production costs to fall further. Lower input costs could put pressure on copper prices as well. We have also seen this in steel, where falling raw material prices have taken their toll on steel prices.

We may see the US dollar strengthening further in 2016. Geopolitical tensions, especially in the Middle Eeast, coupled with the currency war initiated by China, could lead to a stronger US dollar in 2016. A stronger US dollar would bring down the unit production costs for copper mines situated outside the US.

Mines outside the US (VTI) have most of their costs denominated in currencies other than the US dollar. However, they mostly sell copper priced in dollars. A stronger dollar could help bring down copper’s unit costs further.

We could see copper drifting toward $4,000 per metric ton levels in 2016. Investors could use copper as a proxy to bet against the global economic growth, similar to last year. The fact that copper is still ~30% above its 2009 lows, while other industrial metals are trading either lower than or near their 2009 lows, could also work against copper.

Moreover, by breaching the crucial $4,500-per-ton level on a closing basis in the first trading week of the year, copper has shown weakness on technical parameters also.

Companies including Freeport-McMoRan (FCX), Southern Copper (SCCO), Teck Resources (TCK), and Glencore (GLNCY) could face a challenging 2016 if copper prices fall further. Meanwhile, Freeport investors have other worries at hand, as we’ll explore in the next part of the series.