Copper on the London Metal Exchange was in a complete downtrend in the week ended January 9. It fell 4.7%. Copper on Comex fell 5.3% last week. The negative sentiment persisted in copper throughout last week. It pulled copper prices down to 6.5-year lows. 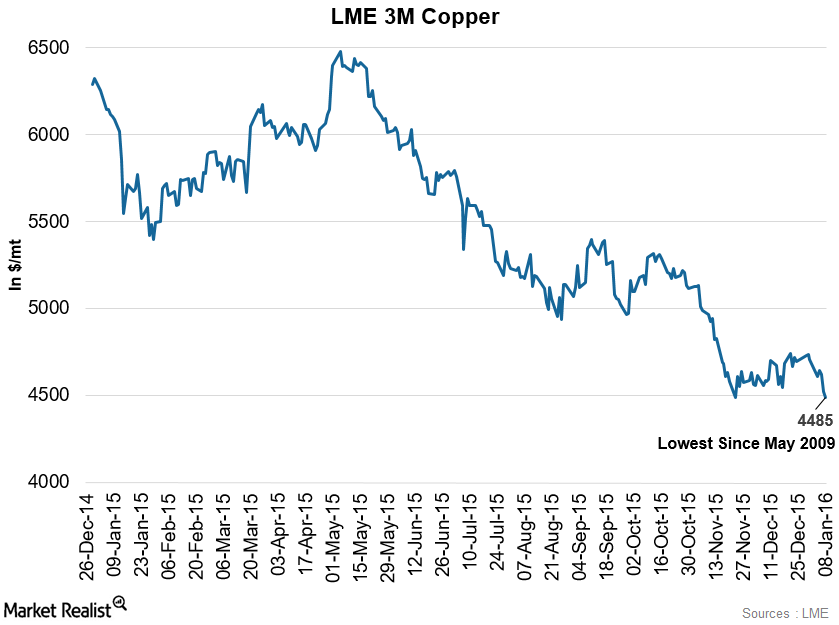 China is the top copper consumer, accounting for almost half of global demand. Weakness in the Chinese economy has been pulling copper prices down. In 2015, LME copper fell 25.3% and traded at multiyear lows because of weak demand from China. The same negative momentum transferred to copper and other base metal miners.

The miners Freeport-McMoRan (FCX), Glencore (GLNCY), Rio Tinto (RIO), and BHP Billiton (BHP) lost a significant portion of their value in 2015 because of the fall in base metal prices. Freeport and Glencore lost more than 70% of their value in 2015. Copper started this year with the same demand worries from China and fell 4.7%.

Last week, China announced its plans to buy copper from Chinese smelters to support the industry. According to the State Reserve Bureau, China plans to buy up to 150,000 tons of Copper. China imports almost 70% of its copper and accounts for 45% of global demand. Earlier in December, China’s copper smelters declared production cuts of 350,000 tons in 2016. At the end of December 2015, Chinese smelters declared their plans to cut copper sales in the first quarter of 2016 by 200,000 tonnes. China hopes to support copper prices and the industry. For more analysis on this approach, please read China’s Smelters Will Cut Copper Sales in 2016.

The Power-Shares DB Base Metals Fund (DBB) fell 4.5% in the week ended January 9.