Beverage giant Coca-Cola (KO) is scheduled to report its results for the fourth quarter of fiscal 2015 on February 9, 2016. The company’s fourth quarter ended on December 31, 2015. Coca-Cola’s revenue missed analysts’ estimate in the third quarter of fiscal 2015 as currency headwinds continued to impact the company, which operates in over 200 countries. 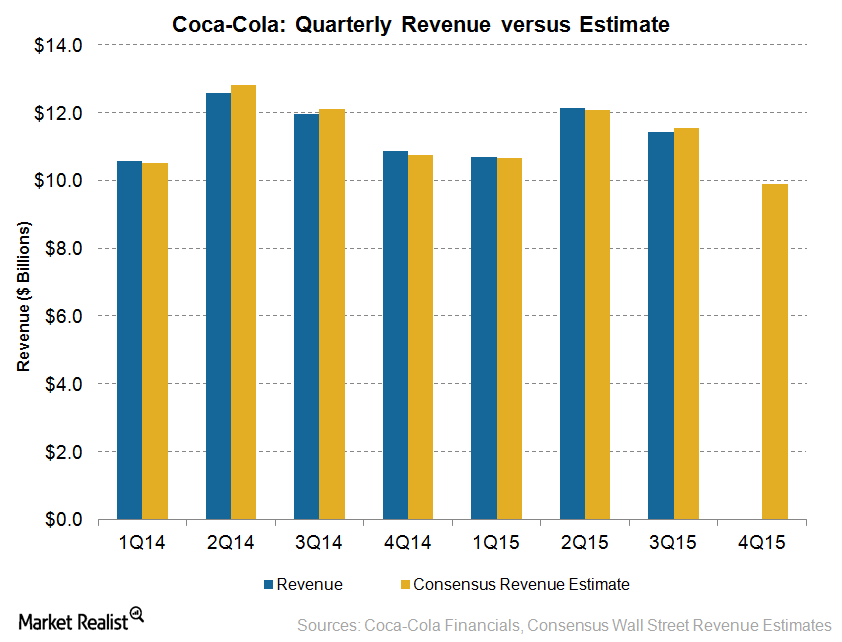 Coca-Cola’s organic revenue in 3Q15 grew 3%, driven by the favorable impact of price and mix as well as slight growth in concentrate shipments. Coca-Cola constitutes 0.8% of the iShares Russell 3000 ETF (IWV).

The consensus Wall Street analyst estimate for Coca-Cola’s 4Q15 revenue is $9.9 billion, which indicates a 9% decline from the comparable quarter of the previous year. In an update from November 2015, Coca-Cola stated that it expects currency headwinds to have a 7 percentage point impact on 4Q15 net revenue. The company had previously estimated a 6 percentage point headwind from currency fluctuations on its 4Q15 revenue.

Overall, analysts expect Coca-Cola’s fiscal 2015 revenue to fall 4% to $44.3 billion, primarily due to the impact of adverse currency movements.