In this series, we will discuss various factors that impacted IBM’s (IBM) growth in 2015. IBM has been grappling with a lack of revenue growth in the past 14 quarters. IBM has followed an acquisition strategy to spread its tentacles in the rapidly growing SMAC (social, mobile, analytics, and cloud) areas, which is why it is spending billions of dollars on strategic initiatives. 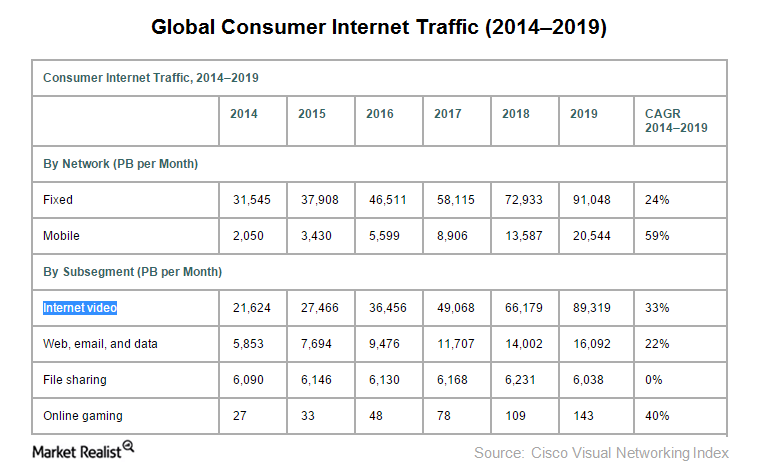 IBM intends to incorporate Clearleap into its cloud platform. Clearleap will be integrated into the Bluemix platform-as-a-service (or PaaS), which will enable customers to develop applications using components of its video platform. This will be similar to how IBM’s Bluemix enables users and developers to integrate its Watson AI (artificial intelligence) into apps to pick trends.

According to Cisco (CSCO) Visual Networking Index, consumer Internet video traffic will be ~80% of all consumer Internet traffic in 2019, as compared to 64% in 2014. IBM stated that analysts estimate that 80% of the world’s data is unstructured. Video makes up a considerable part of this. If we look at IBM’s estimates, video will constitute approximately 65% of the world’s Internet traffic by 2019. With Clearleap, IBM can look forward to enhancing its cloud offerings in the video and data file management space.

In the words of Robert LeBlanc, senior vice president of IBM Cloud, “Clearleap joins IBM at a tipping point in the industry when visual information and visual communication are not just important to consumers but are exploding across every industry.”

In the public cloud space, IBM’s cloud offering SoftLayer competes with Amazon’s (AMZN) AWS (Amazon Web Services), Microsoft’s (MSFT) Azure, and Google’s (GOOG) Cloud Platform. Clearleap is one of Amazon’s AWS partners. However, after being acquired by IBM, it remains to be seen how Clearleap’s relationship with AWS will pan out in the future.

Investors who wish to gain exposure to IBM can consider investing in the iShares U.S. Technology ETF (IYW). IYW has an exposure of 46.7% to application software. It invests ~12.5% of its holdings in IBM.