The construction, machinery, and infrastructure sectors together account for almost 80% of total steel consumption in China (FXI). In this part of our series, we’ll explore how steel demand from these three sectors could shape up in 2016. 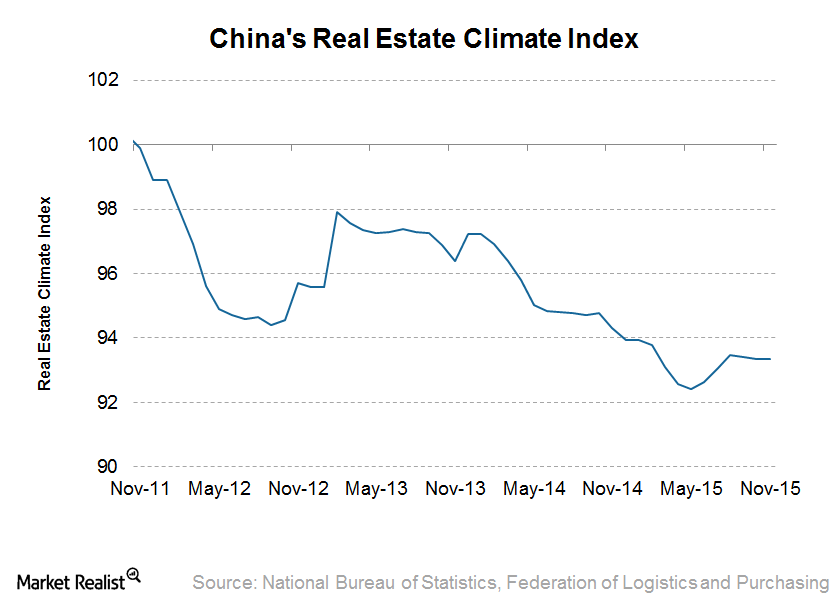 The construction sector is the biggest steel consumer in China, accounting for more than half of steel consumption in the country. China’s real estate climate index measures the country’s aggregate business activity for land and real estate. This index fell in almost every month of 2015.

The real estate indicators started picking up toward the end of the year due to the government’s policy support. However, the inventory still remains high, which could keep a lid on new construction activity in at least the first half of 2016. After this, the property sector might pick up again, supported by government’s easing policy. However, this may not be enough to absorb the excess iron ore supply hitting the market in 2016 and beyond.

The outlook for investment in infrastructure remains positive in 2016 as the government needs to add stimulus. The rail capital expenditure accelerated in China toward the end of 2015, and this momentum should continue in 2016.

Airports are also expected to see more traffic growth. Overall, policy support and initiatives such as OBOR (one belt, one road) and the public-private partnership rollout should drive infrastructure growth in China going forward in 2016.

China’s Caixin manufacturing PMI (purchasing managers’ index) for December 2015 came in at 48.2, which was below expectations and below November’s 48.6.

Dr. He Fan, chief economist at Caixin Insight Group, noted, “The forces driving economic recovery have encountered obstacles, and the economy is facing a greater risk of weakening.”

As the Chinese economy transitions from a manufacturing base to a service-based economy, the manufacturing activity might grow at a lower clip in 2016.